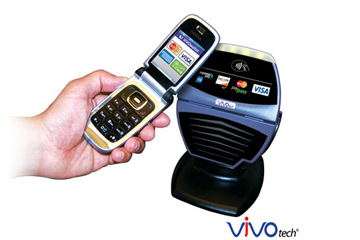 NFC tech in phones will let us pay for transactions as well as keep better track of our finances.
Image courtesy of VivoTech

Because NFC is a standard, it has particular specifications. The transmission frequency for data across NFC is 13.56 megahertz. Like all radio signals, these travel in waves, with peaks and troughs. The distance from the peak of one wave to the next is a wavelength. At 13.56 megahertz, that means the signal moves 13.56 million wavelengths in the span of a second.

The NFC forum, an organization that establishes and promotes the NFC standard, designed NFC to send data in three different transmission speeds. Currently, an NFC device can send data at a rate of 106, 212 or 424 kilobits per second. These speeds are fine for short bursts of information, but aren't suitable for heavy-duty tasks like watching videos or playing games.

There are three modes of operation for NFC. The read/write mode allows an NFC device to read a tag like the kind you'd find in a poster. The peer-to-peer mode makes it possible for two NFC-enabled devices to exchange information. This lets you do things like tap your phone to another person's phone to exchange contact information. Finally, there's the card emulation mode. This is what lets NFC emulate -- or imitate -- a smart card like the kind you use in public transportation or ticketing systems.

It's important to remember than NFC is a developing standard. It will evolve as time goes on. While the standard dates back to 2004, it's still a young technology. Adoption of NFC has been slow in the United States -- only a few smartphone manufacturers and retail organizations support it. In other parts of the world, notably Japan, it's much more popular.

One risk we run with NFC is that it will fall out of favor before it sees widespread adoption. It's possible some other competing technology will sweep in and take up the niche NFC would otherwise fill. But that's just one hazard we could face with this technology.