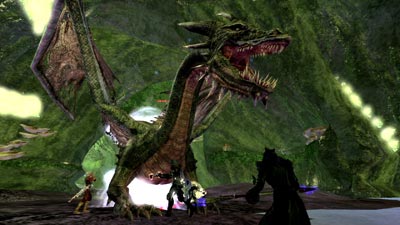 Getting around an MMORPG world is no small feat. Worlds tend to be large, and they're typically arranged into zones designed for players of different levels. When a new character enters the world, it starts out in a zone with low-level enemies and lots of quests. Once the player completes the quests, the character is usually strong enough to move on to a neighboring zone, which has slightly harder quests and enemies. While this gives most games a logical progression, some players find it repetitive and refer to the quest-and-level cycle as the level treadmill. Most games have several other features in common:

Each of these changes as players reach higher levels. In general, as players progress, they gain access to better abilities, higher-quality gear and faster transportation methods. But the game doesn't stop when players reach the level cap. Reaching the highest level often gives characters access to endgame dungeons. These dungeons are exceptionally difficult and sometimes require large numbers of players to complete. For some people, these dungeons, or raids, are the point of the game. But for others, the game is as much about socializing as it is about getting gear and loot.

Coordinating all of this activity requires lots of equipment. Next, we'll look at exactly how a computer and a server become a game world.