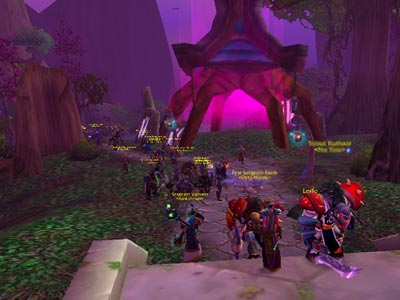 MMORPGs are social. You can play parts of the game by yourself, but portions of the game require a group. Some of these groups are temporary -- they last only as long as it takes to kill a monster or clear a dungeon. Many games allow one person in the group to act as a leader. The leader can invite people to the group, remove people who are causing trouble and decide who gets what piece of gear.

Players can also join long-term groups called guilds. Guilds, also known as clans, kinships or crews, are usually groups of people who are working toward a common goal in a game. A guild might emphasize raiding -- progression through difficult dungeons with large groups of players -- or it might focus on helping lower-level players acquire gear and experience. Players may argue that one type of guild is better than another, but it all depends on what a particular player is looking for in the game. A player who wants to spend lots of time raiding may not be happy in a smaller guild that is mostly devoted to playing in small groups. Someone who wants to spend lots of time in player-versus-player (PVP) situations or battlegrounds may have more fun in a guild that includes lots of PVP enthusiasts.

Regardless of the size or structure of a guild or group, socializing tends to be a big part of playing an MMORPG. In some ways, the game is like a very big, very elaborate chat room. As players complete quests and fight their way through dungeons, they're often carrying on multiple conversations. Most games have lots of chat channels that allow players to talk only to their guild, their group or everyone in a particular zone. Some games have special channels for trade or for players who are looking for groups or guilds. Voice chat can take place through an in-game voice client or through a third-party program such as TeamSpeak and Ventrilo.

To some players, socializing is the most important part of game play -- some sources cite it as the reason why gamers spend almost twice as much time playing MMORPGs as other games [source: Caron]. But to others, raiding, fighting and getting better is the game's ultimate purpose. Next, we'll look at the basics of MMORPG game play.

The largest source of information on who plays MMORPGs -- and why -- is the research of Nick Yee. According to Yee, the average age of an MMORPG player is 26. Twenty-five percent of players are teen-agers, and 50 percent have full-time jobs [source: Yee, demographics]. Although statistics differ from game to game, about 85 percent of players are male [source: Yee, gender]. However, Yee's data comes from voluntary surveys of players themselves -- since this is a self-selected group, the numbers may not be as accurate as they would be from a truly random sample.