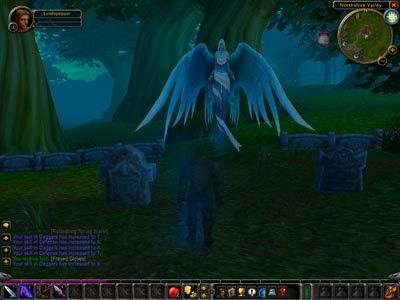 MMORPGs start out much like single-player RPGs do -- you buy a copy of the game and install it on your computer. But that's where the two game types diverge. With a single-player game, you can start playing right away. If you like, you can download and install a file called a patch that fixes any bugs discovered after the game's release.

In an MMORPG, patches are mandatory. The first time you open the game, your computer will download and install the necessary patches needed to make your game match everyone else's. Every time a new patch arrives, your game client will download and install it before you can play. You also have to register for an account, which allows you to log in to the game. Without an account, which typically costs around $15 a month, you can't play. There are a few games you can play online for free, but often you have to pay for better items or servers.

Unlike single-player worlds, MMORPG worlds are persistent. When you exit an ordinary RPG, the game world stops, and it starts again the next time you open the game. But an MMORPG world continues to function regardless of whether anyone is playing. For example, you might log out of the game surrounded by flowers that you intend to pick when you return. But if another player picks them all while you're gone, you'll log back in to find yourself in the middle of an empty field. If another player buys the only copy of a book that an in-game vendor has, you won't see the book if you stop by in the hope of finding it.

This persistent, ever-changing world also affects how you play the game. In an RPG, if you need to take a break to get a sandwich, you can just pause the game and resume play when you get back from the kitchen. If you're about to do something risky, you can save your game -- if your risk doesn't pay off, you can load your saved game and try again.

In an MMORPG, though, you can't pause, and you can't go back to a saved game. If you step away from the keyboard without moving to a safe location, you may come back to discover that your character was killed while you were gone. The game saves changes to your character as you go along, essentially overwriting each save.

Rather than allowing you to revert to a saved game, MMORPGs give you some options for making multiple attempts at dangerous tasks or undoing in-game choices. You can resurrect characters, although sometimes you have to pay a penalty, such as a fee to repair damaged armor. Sometimes, you can visit NPCs to change your characters' strengths or abilities.

However, some choices can't be undone. In most MMORPGs, you can't change your character's gender, race or class after you've started the game. If you decide you want to be a druid instead of a paladin, you have to make a new character. If you choose a reward from a quest and decide you'd like something different, you may not be able to try again for a different result. Fortunately, since MMORPG worlds tend to be very large, there are usually lots of opportunities for finding comparable -- or even better -- gear.

Killing monsters and collecting gear is only one part of the MMORPG world, though. On the next page, we'll look at what may be the most addictive component of an MMORPG -- the companionship of other people.