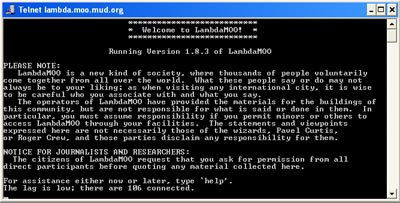 Logging on to LambdaMOO:
Screenshot taken by HowStuffWorks staff

The first computerized role-playing games didn't have many of the bells and whistles of today's 3-D games. Text-based role-playing games, like multi-user dungeons (MUDs), took the idea of multi-player role playing to the online world. Particular types of MUDs include MUD object-oriented (MOO) and MUSH games. In games like these, lines of text describe the game world for multiple players.

Computer role-playing games, from classics like Sierra's "Space Quest" series to the forthcoming "Fallout 3," use animation and sound to recreate a game world. A player might create and control one character or a whole group of characters. In some games, players can customize their characters' statistics and appearance. In others, people choose from a selection of pre-made characters.

But these games don't always support multiple players the way MUDs or tabletop games do. In some games, multiplayer mode is simply a multi-player copy of the single-player storyline. Instead of allowing one player or the computer to control multiple characters in the group, the multi-player mode allows multiple people to share the responsibility.

MMORPGs take this one step further. A vast number of players can create their own, independently controlled characters, each choosing to play in his or her own way. The first widely-popular MMORPG was "Ultima Online," which came out in 1997. In 1999, "EverQuest" made its debut ­and quickly gained such a reputation for being addictive that people nicknamed "EverCrack." Today's titles include "World of Warcraft," "Guild Wars," "City of Heroes," "EVE Online" and "Lord of the Rings Online." An MMORPG based on the world of the TV show "Firefly" and the film "Serenity" was announced in December 2006.

You could describe these games as vastly expanded versions of single-player RPGs or as MUDs with fancy graphics and sound. But in spite of the similarities, MMORPG worlds have some notable differences when compared to other games. We'll look at some of these in the next section.

A Roll of the Dice

In table-top RPGs, players typically roll dice to determine a character's attributes, like strength, dexterity and intelligence. A better roll means that the character excels at that particular attribute. This characteristic still exists in today's MMORPGs -- many players refer to creating a character as "rolling" or "rolling up," regardless of whether the specific game involves simulated dice or random number generators.