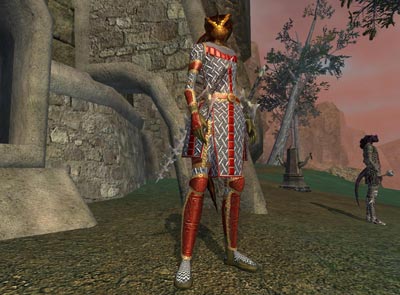 Although there are exceptions, most MMORPGs are set in worlds that have science-fiction or fantasy elements. Some worlds that appear in MMORPGs, such as the "Star Wars" universe and J.R.R. Tolkien's Middle-earth, existed long before their corresponding games did. Others are derived from other computer games or invented from scratch.

The worlds themselves can be vastly different from each other, but game play is usually similar from world to world. Basically, human players create virtual characters. These player characters (PCs) can interact with each other and with characters that the computer controls -- these are non-player characters (NPCs). There are different types, or classes of PCs, such as warriors, rogues, mages and healers. The different classes come with different sets of skills.

As PCs move through the world, they kill monsters and complete quests. In the process, they gain experience, which allows them to progress through levels, or level up. As characters level up, they get physically stronger and gain access to better skills, weapons and gear.

This basic style of game play was present in MMORPGs' early predecessors -- the tabletop role-playing games (RPGs), such as "Dungeons & Dragons," that debuted in the 1970s. In these games, a rulebook outlines everything from character creation to combat progression. A game master (GM) or dungeon master (DM) uses the rules to structure the game. He or she gives the players tasks, hints and bits of information designed to move a story forward. In theory, the story -- and the game -- can go on forever, but often the GM creates a campaign, or an arc of events that gives the overall story a little direction.

An elf wields her bow in SOLAR, a Georgia LARP.
Image courtesy Jennie Breeden/Geebas on Parade

Today's RPGs are similar to those from 30 years ago. Players sit together in a room and describe what's happening in an imaginary world, using dice or other tools to determine whether characters are successful at what they're trying to accomplish. The progression of the story and the development of the characters in it are the heart of the game.

Some players take tabletop RPGs into the real world. In live-action role playing games (LARPs), players physically act out the actions of their characters, including participating in simulated combat with props and padded weapons.

After the development of home computers, it didn't take long for people to turn these low-tech, in-person games into computer games. Next, we'll take a look at the digital predecessors to MMORPGs.­

Although "Second Life" exists in a persistent, virtual world, it's not really an MMORPG. People create avatars, or virtual versions of themselves, to access Second Life, but they don't necessarily participate in a game once they're there.