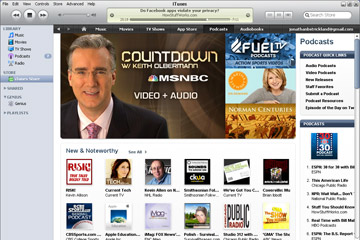 The future of iTunes most certainly includes ongoing hacking wars. One can only wonder if Apple will release a version of iTunes for Linux, if only to eliminate the legitimate complaint that Linux people don't get to use the iTunes Store.

The introduction of the iPhone, iPad and the iPod touch have increased demand for the iTunes service, particularly the App Store. But it also means bad news for third-party products. Now that Apple is in the smartphone game, it no longer partners with other phone manufacturers to support iTunes implementation. From a business perspective this makes sense -- Apple is famous for trying to control as much of the customer experience as possible. By eliminating support of third-party products, Apple channels more customers to its own line of devices.

Apple also introduced Apple TV, a device that can play iTunes content on televisions. In September 2010, Apple unveiled some new features for Apple TV, including a partnership with Netflix. Apple is also expanding its content in unexpected directions like iTunesU -- a free service for universities to post lectures and other content for their students to download through the iTunes software. This prompted the University of Missouri's School of Journalism to include a new requirement for all incoming freshmen in 2009: every student must purchase an iPod touch or iPhone to access class materials [source: Rivera]. Though the word "requirement" may sound as though students will get themselves in trouble if they don't own an iPod or iPhone, the truth behind the arrangement is less extreme -- by making the devices a requirement, students could build the price of the device into their student financing requests. The school stated that students wouldn't be punished for not owning an Apple-branded product.

The next logical step might be to offer a similar service to businesses -- they could use iTunes to supply recorded meetings or training lectures to remote workers and frequent travelers. The future may see iTunes as standard software on office computers (and tiny iPod speakers embedded in the lapels of dark-blue suits everywhere).

For more information on iTunes, visit the links below.

Listen to the HowStuffWorks.com Podcasts