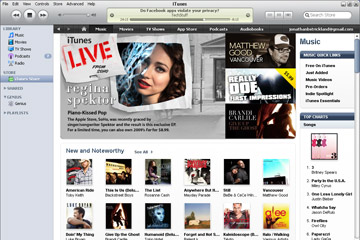 Music is still the heart of the iTunes store.
Screenshot by HowStuffWorks.com

iTunes compatibility in the realm of portable players is a bit of a quagmire, which is part of the reason why some people just avoid iTunes entirely. You can use the iTunes Mac software with, say, a Creative Nomad MP3 player (see iTunes for Mac OS X: Compatible Players for a complete list). But iTunes for Windows only supports the iPhone, iPad or iPod series -- if you connect a Creative Nomad to a Windows machine running iTunes, the software won't see it. And there's no version of iTunes for Linux machines, either. But there are ways around that -- just do a Google search for "iPod Linux hacks." What's more, Apple is no longer updating the compatible players list, which may suggest iTunes won't support new non-Apple players moving forward.

Since the introduction of the iPhone, Apple no longer provides iTunes support to new phones from other manufacturers. Apple's strategy is to convince consumers to purchase Apple products and use them with Apple services. The company doesn't make it easy for you to use iTunes with any non-Apple device. Some companies, such as Palm, tried to get around Apple's closed system only to be shut down in subsequent iTunes updates.

So iTunes (or at least the Mac version) does support other players besides the iPod. But here it gets even trickier: Older music you downloaded from the iTunes Store is protected by the Apple FairPlay digital rights management (DRM) format, which is a proprietary, protected AAC file format that Apple doesn't license to anybody. The only devices that can play those files are ones with the ability to decrypt the Apple DRM, which includes your computer running iTunes, an iPod, an iPad, an iPhone, an iTunes phone and your speakers connected to AirPort Express. (You can't play them on Roku's SoundBridge, because Apple licensed Roku the iTunes software minus the DRM decryption.)

To play iTunes Store files with DRM on a portable player besides an iPod, you have to first burn them to a CD or DVD as MP3 files. The DRM encoding doesn't make it to the disc. You then rip the now-unprotected files back into your iTunes library and download them to the player.Alternatively, you can repurchase songs at a reduced price to get the version without Fairplay. Songs purchased from the iTunes Store in the iTunes Plus format don't carry DRM, which means you won't have to go through this step.

So now we know which devices will and won't work with the iTunes software. Next, we'll find out what you can do with the software if you've got the right hardware (or the wrong hardware with the right hack).

Broadband Internet (to use iTunesStore)

Broadband Internet (to use iTunes Store)