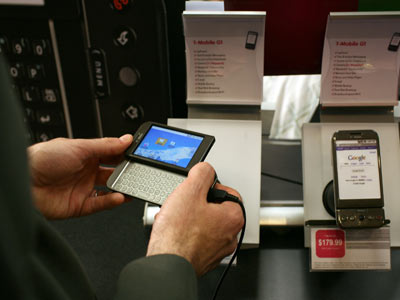 The HTC G1, the first phone to use the Android operating system in the United States, retailed for $179 with a 2-year T-Mobile contract.
Justin Sullivan/Getty Images

As we mentioned earlier, the first handset to feature the Android OS was the High Tech Computer Corporation's HTC G1. Before the phone even went on sale, bloggers and journalists began to speculate on who would be the next handset manufacturer to get into the Android game. Gradually, other companies like Motorola, Samsung and Dell debuted their own Android handsets.

The first cell phone provider in the United States to support an Android phone was T-Mobile. The company first offered the HTC G1 on its 3G network to customers in October 2008 for $179 with a contract. A month earlier, T-Mobile offered current customers the opportunity to reserve an HTC G1 in advance. The pre-sale was a huge success -- T-Mobile had to end the sale early when orders exceeded the company's stock of 1.5 million phones [source: Bylund].

But some cell phone service providers have gone so far as to criticize the Android OS in public. Sprint CEO Dan Hesse said that Android wasn't "good enough to put the Sprint brand on it" [source: Carew]. Hesse did leave open the possibility that Sprint would work with the Android platform in the future. Meanwhile, Peter Michaels, the CEO of Hop-on, criticized Hesse's statements. Michaels alleged that Sprint makes it hard for inexpensive handset vendors to join its network. He also pointed out that Sprint was a founding member of the Open Handset Alliance -- a project that spawned Android. But Michaels said that while the company says it supports open platforms, its actions seem to contradict those claims [source: Hop-on].

Hesse must have changed his mind about the Android operating system. Sprint now supports the HTC Hero and the Samsung Moment, both Android phones.

Verizon debuted two Android phones in 2009: the Motorola Droid and the HTC Eris. AT&T announced at the beginning of 2010 that it would soon carry Android phones made by HTC, Motorola and Dell.

With Android spreading to all major cell phone carriers across the globe, we may see Google dominate the mobile phone market the same way it has for online search. Maybe this is the droid you're looking for.

To learn more about the Google Phone and related topics, dial up the links below.