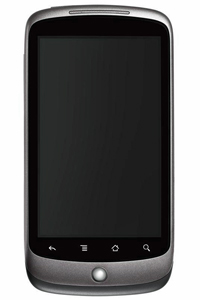 The Nexus One is the first phone to be sold by Google directly to consumers.
Courtesy Google

Several handsets use the Android operating system. There's the HTC G1, the first smartphone to run on Android in the United States. Verizon offers the Droid, an Android phone built by Motorola. Several other phones also rely on Android but the Nexus One is the first true Google phone -- the first phone you can purchase directly from Google.

When Google first issued Nexus One models to its employees, the handsets had no manufacturer markings on the case [source: Abramson]. Once Google offered the phone to the general public, the hardware included an HTC logo.

The phone works on the 850, 900, 1800 and 1900 megahertz frequencies on GSM/EDGE cellular networks. It also has a Wi-Fi receiver that is compatible with 802.11 b and g protocols. The phone supports Bluetooth 2.1 and A2DP stereo Bluetooth. It also has an assisted global positioning system receiver.

The phone's 5-megapixel camera comes with an LED flash. It also has a digital zoom feature that provides a zoom power of 2X. The camera can take video at 20 frames per second with a resolution of 720 by 480 pixels.

As hardware becomes more advanced, Google is likely to tweak the Android OS to support new features and functions. And if Google doesn't do it, someone else will. That's the beauty of an open-source system.

What makes Android tick? Read on to find out.

The HTC G1 sports a 3.2-inch (8.1-centimeter) LCD touchscreen, a GPS receiver, an accelerometer, an electronic compass, a 3.2 megapixel camera and WiFi, and 3G connectivity capability. The screen slides to the side to reveal a full QWERTY keyboard. The handset also has a storage card expansion slot. One thing it doesn't have is a standard headphone jack -- you have to use a USB adapter if you want to use your headphones. Since the phone has a media player, many reviewers felt the lack of a standard jack was one strike against the device.