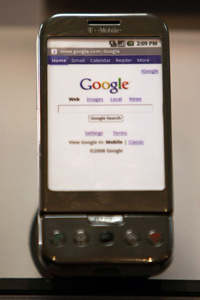 In 2007, people began to circulate rumors that the Google corporation would introduce a smartphone to compete with Apple's iPhone. Speculation ran rampant -- would Google get into the hardware business? Would the company rely on established cell phone manufacturers for hardware? Would Google simply concentrate on building smartphone applications for other devices like the iPhone?

Google executives claimed that the company wasn't interested in building hardware. But some Web journalists and bloggers remained unconvinced. By early 2008, it became clear that the Google executives had been straightforward all along -- Google wasn't getting into the handset hardware game. But they were getting into the handset software business with a mobile operating system (OS) called Android.

Unlike the Apple iPhone, which has its own OS exclusive to the iPhone's hardware, Google's approach was to create an OS that could work on phones built by different manufacturers. Additionally, no single service provider would have exclusive rights to use the Android platform. In that respect, Android joins other mobile device operating systems like Symbian and Windows Mobile.

In January 2010, Google unveiled the Nexus One. This Android phone was the first handset you could purchase directly from Google. Like the G1, HTC provided the hardware for the Nexus One. Customers could choose to buy the phone for $179 if they signed up with T-Mobile for a two-year contract or $529 for an unsubsidized phone without a contract.

An important factor that sets Android apart from most other mobile operating systems is that it's based on an open source platform. That means Google allows anyone to look at and modify most of Android's source code. Ideally, this would mean that if a developer felt Android needed a specific feature or capability, he or she could build it and incorporate it into the OS. The software would constantly evolve.

Initially, the Android platform didn't support many of the features of other smartphone operating systems. For example, Android offered no Microsoft Exchange support upon release. Many companies use Microsoft Exchange as a platform for e-mail and scheduling applications. But because of the open source nature of Android and Google's support for third-party developers, it didn't take long before a company offered an application that would sync Exchange functions with the phone. The Android platform may have to play catch up with the other operating systems on the market, but it may have the ability to go even farther.

On the next page we'll introduce you to the Nexus One Google phone.