Rules and Regulations for Gold Farming 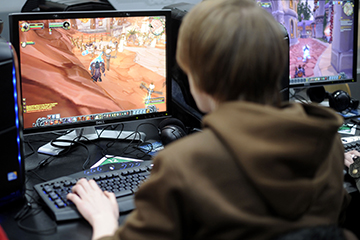 You don't want to violate your games' terms of service, do you?
Nigel Treblin/AFP/Getty Images

After all this talk of gold farming, you've probably been wondering: Is it even legal? Well, yes, in the sense that it probably won't land you in jail, but ultimately no, because it violates many MMORPGs' terms of service, which you agree to when you enter the game. For these reasons, it's a bit of a legal gray area.

There's no disputing that gold farming violates the terms of service in many games. Blizzard, the parent company of "World of Warcraft," made this painfully clear in that game's terms, which state, "you may not sell in-game items or currency for 'real' money." However, this bit of remarkably understandable legalese has done little to stop the practice. Players in violation of the rule are actually quite hard to detect, and even if they're caught, the worst that usually happens is their account is suspended. In that case, they can just create a new one.

Still, the video game makers have enjoyed some legal victories. In 2008 Blizzard forced a settlement with gold-farming and power-leveling company In Game Dollar that required them to stop advertising in the game and selling virtual items for real money [source: Duranske].

Some countries have laws that place limits on gold farming. South Korea, for example, passed legislation in 2006 that was amended to ban the exchange of virtual goods for real money if those goods were obtained through a security vulnerability or the use of automated bots. Gold farmers can, however, still collect in-game items and currency through normal means. Developing countries like China have been more reluctant to place limits on the practice: While it's somewhat looked down upon, it's also been enormously successful [source: Lehdonvirta and Ernkvist].

One way you can get in trouble is by not paying taxes on your gold-farming earnings. Believe it or not, the U.S. Internal Revenue Service (IRS) has a web page that specifically provides guidance on the "tax consequences of virtual world transactions." It states that if you bring in more money from the virtual world than you spend, that money may be subject to taxation [source: IRS]. Local Chinese officials are also looking to benefit from the budding industry, sometimes requiring gold farms to register with the municipality and pay taxes on their earnings [source: Jin].

When it comes to transactions of virtual goods, some companies are fighting fire with fire. They use a free-to-play model, which means players can play the game for free but must spend real money to buy in-game items from the company's marketplace. That largely takes gold farmers out of the equation. It's a different approach from games like "World of Warcraft," which make money through monthly subscriptions but have no marketplace of their own. That creates a big demand for third-party services like gold farming.

Researching this article, I was struck by how much money gamers spend on gold farming each year. I can understand the urge. Imagine if life were like that: Need a boost? Just make a trade and you've got it. I suppose we can do that in some ways, like trading four years of our life for a college degree and a better job or 35 years of savings deposits for a good nest egg and an enjoyable retirement. Not nearly as easy, is it? But then again, if life were more like a role-playing game, we'd have a lot more monsters chasing us.