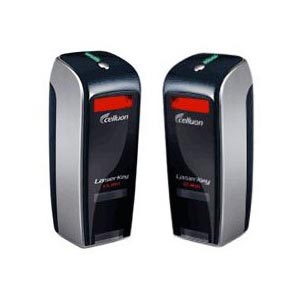 Although virtual laser keyboards perform the same function as traditional keyboards, how they analyze and send information to another device is a different process.
© Amazon.com­

­At their most basic, all keyboards, whether they're physical or virtual, are input devices -- once you type in a certain series of keystrokes, you're telling the keyboard to deliver a command to your computer. This allows you to write in a word-processing document, close out a program or write out a Web site's URL in a browser. But apart from the science-fiction element, what sets a virtual laser keyboard apart from a regular keyboard?

A traditional keyboard, one that hooks up to a desktop computer or is part of a laptop, is very much like another smaller computer. If you take it apart, it has a processor and circuitry similar to the insides of your computer. Underneath each key is a grid of circuits, and once you press a key, the switch closes. This sends a small electrical current through the grid, which the processor recognizes and analyzes. The processor, in turn, sends the information regarding your keystrokes to your computer, and it can do this several ways. Most desktop users connect their keyboard using cables, although common wireless technologies like Bluetooth let you type from a distance, as long as the computer has the necessary receiver. Laptop keyboards, on the other hand, connect directly to the computer's hardware.

When you type on a virtual laser keyboard, there aren't any switches involved. In fact, there aren't any mechanical moving parts at all. The device projects the image of a QWERTY keyboard onto a flat, non-reflective surface using a red diode laser. The laser, similar to the kind you see on those cheap laser pointers people wave at rock concerts, shines through a Diffractive Optical Element (DOE), which is simply a tiny image of the keyboard. The DOE, along with special optical lenses, expands the image to a usable size and projects it onto a surface.

But a simple image of a keyboard won't get you anywhere -- something needs to analyze the information you type in. Situated near the bottom of the device is an infrared (IR) laser diode, which shoots out a thin plane of infrared light. The plane, which is invisible and runs parallel to the surface, rests only millimeters above the image of the keyboard. When you start typing, you pass your fingers through certain areas of the infrared light. A CMOS (complimentary metal-oxide semiconductor) images your finger's position within the area of the keyboard, and a special sensor chip called a Virtual Interface Processing Core analyzes the location of the intended keystroke. The device then sends this information to the computer receiving the commands.

So how do you use a virtual laser keyboard?