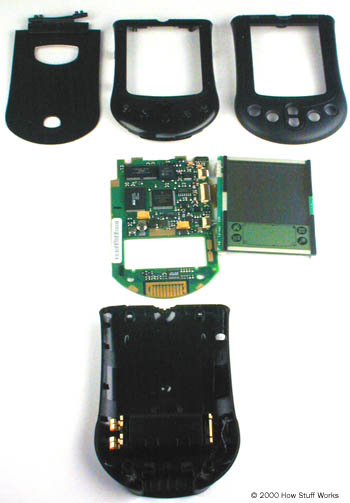 Here are the parts of the PDA -- the case, the LCD screen and the circuit board. This model comes in basic black, but you can buy interchangeable covers in various colors.

So far, we've looked at the PDA's microprocessor, memory and operating system. Now let's look at the other parts of a PDA.

PDAs are powered by batteries. Some models use alkaline (AAA) batteries, while others use rechargeable batteries (lithium, nickel-cadmium or nickel-metal hydride). The battery life depends on what kind of PDA you have and how you use it. Here are some of the things that can drain batteries:

Battery life can vary from hours to months, depending upon the PDA model and its features. Most PDAs have power management systems in place to extend the battery life. Even if the batteries are so low that you can no longer turn the machine on (it will give you plenty of warning before this happens), there's usually enough power to keep the RAM refreshed.

If the batteries do run completely out of juice or if you remove them, most devices have an internal backup battery that provides short-term power (typically 30 minutes or less) until you install a replacement. If all power sources are depleted, PDAs lose all of the data in RAM. This makes backing up or synchronizing your PDA extremely important.

In addition to battery power, many PDAs come with AC adapters to run off household electric currents. A car adapter is also generally available as an accessory.

PDAs use an LCD (liquid-crystal display) screen. Unlike the LCD screens for desktop or laptop computers, which are used solely as output devices, PDAs use their screens for output and input. The LCD screens of PDAs are smaller than laptop screens, but vary in size. Almost all PDAs now offer color displays.

PDA displays have the following features:

PDAs vary in how you input data and commands. Some devices use a stylus and touch screen exclusively in combination with a handwriting recognition program. Using a plastic stylus, you draw characters on the device's display or dedicated writing area. Software inside the PDA converts the characters to letters and numbers. On Palm devices, the software that recognizes these letters is called Graffiti. Graffiti requires that each letter be recorded in a certain way, and you must use a specialized alphabet. For example, to write the letter "A," you draw an upside-down V. The letter "F" looks like an inverted L. To help Graffiti make more accurate guesses, you must draw letters on one part of the screen and numbers in another part.

If you can't get the hang of PDA handwriting, you can use a miniature onscreen keyboard. It looks just like a regular keyboard, except you tap on the letters with the stylus. In addition, many devices now include a small (and usually cramped) QWERTY keyboard. Some of these require you to use your thumbs to type. And you can use a full-size keyboard by connecting it to the PDA via Bluetooth or a USB port. Each model also has a few buttons and navigation dials to bring up applications and scroll through files.