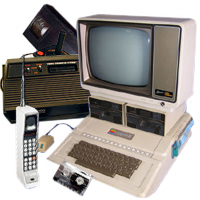 ­Do you remember having a walkman and watching VHS?

If you lived through the 1980s, then you know it was an amazing decade. It seemed like every month some cool new technology came onto the market. Many of the most popular consumer products today made their mark in the 1980s.

To see just how much happened in this decade, here are a dozen technologies that became popular in the 1980s:

Get started with the first technology gadget from the 1980s on the next page.