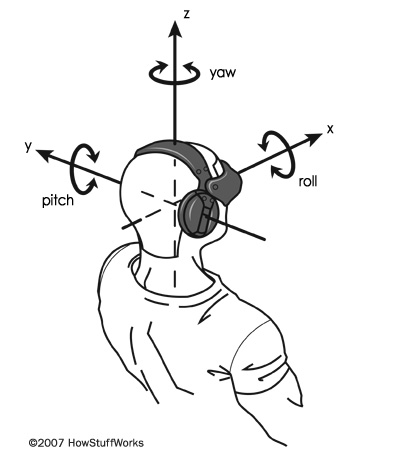 Tracking devices are intrinsic components in any VR system. These devices communicate with the system's processing unit, telling it the orientation of a user's point of view. In systems that allow a user to move around within a physical space, trackers detect where the user is, the direction he is moving and his speed.

There are several different kinds of tracking systems used in VR systems, but all of them have a few things in common. They can detect six degrees of freedom (6-DOF) -- these are the object's position within the x, y and z coordinates of a space and the object's orientation. Orientation includes an object's yaw, pitch and roll.

From a user's perspective, this means that when you wear an HMD, the view shifts as you look up, down, left and right. It also changes if you tilt your head at an angle or move your head forward or backward without changing the angle of your gaze. The trackers on the HMD tell the CPU where you are looking, and the CPU sends the right images to your HMD's screens.

Every tracking system has a device that generates a signal, a sensor that detects the signal and a control unit that processes the signal and sends information to the CPU. Some systems require you to attach the sensor component to the user (or the user's equipment). In that kind of system, you place the signal emitters at fixed points in the environment. Some systems are the other way around, with the user wearing the emitters while surrounded by sensors attached to the environment.

The signals sent from emitters to sensors can take many forms, including electromagnetic signals, acoustic signals, optical signals and mechanical signals. Each technology has its own set of advantages and disadvantages.

To learn more about gear used in virtual reality systems, check out the links below.