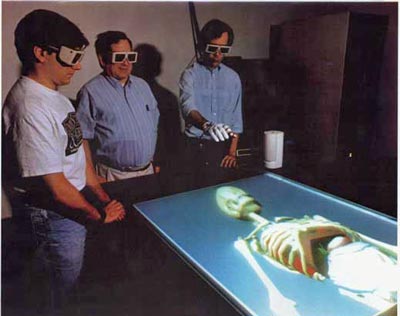 One display system that some VR researchers feel is only tangentially related to virtual environments is the workbench display. In the early '90s, the Office of Naval Research's Computer Science Liaison Scientist, Larry Rosenbaum, led a team of Navy VR engineers in the creation of a large display monitor that allowed multiple users to view it at the same time. Users can view the display vertically or tilted horizontally like a table or bench.

Users wear special goggles while looking at the workbench, just as they would in a CAVE system. Each user sees the same image projected from the workbench display. Because of the stereoscopic projection and the goggles' lens shutters, the objects displayed on the workbench appear to be three-dimensional.

The reason some VR researchers feel the workbench isn't a true representation of creating a virtual environment is due to immersion. Because the user is looking at a display that doesn't fill his field of vision, he remains aware that he is in the real world, although that world now includes virtual objects that he can manipulate. There is no virtual environment to explore -- if the user looks away from the display, he'll see an ordinary, physical room. However, this doesn't change the fact that workbench displays can be very useful.

One use for the workbench display is medical training. A surgeon can practice a procedure on a three-dimensional virtual patient while surrounded by a real medical staff. If the surgeon were to perform the same procedure while wearing an HMD, the people around him would either be characters under computer control or computer avatars representing other humans. With the workbench display, interaction with other people is natural and completely real.

Other applications using workbench displays include visualization of scientific research or product research and development.

In the next section, we'll look at some of the devices that allow users to interact with virtual environments.

The Nintendo Wii’s wireless wand controller could really benefit engineers working in VR. The wand is wireless and includes gyroscopes and accelerometers, which means it can sense motion, tilt and rotation. Compared to other interface devices, the Wii controller is affordable and easy to use. Some VR researchers are already working to adapt the Wii controller for use in VR systems, while others hope the remote is just the first in a trend of inexpensive interface developments.