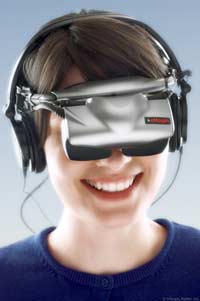 A Head-mounted Display (HMD) is just what it sounds like -- a computer display you wear on your head. Most HMDs are mounted in a helmet or a set of goggles. Engineers designed head-mounted displays to ensure that no matter in what direction a user might look, a monitor would stay in front of his eyes. Most HMDs have a screen for each eye, which gives the user the sense that the images he's looking at have depth.

The monitors in an HMD are most often Liquid Cystal Displays (LCD), though you might come across older models that use Cathode Ray Tube (CRT) displays. LCD monitors are more compact, lightweight, efficient and inexpensive than CRT displays. The two major advantages CRT displays have over LCDs are screen resolution and brightness. Unfortunately, CRT displays are usually bulky and heavy. Almost every HMD using them is either uncomfortable to wear or requires a suspension mechanism to help offset the weight. Suspension mechanisms limit a user's movement, which in turn can impact his sense of immersion.

There are many reasons engineers rarely use these display technologies in HMDs. Most of these technologies have limited resolution and brightness. Several are unable to produce anything other than a monochromatic image. Some, like the VRD and plasma display technologies, might work very well in an HMD but are prohibitively expensive.

Many head-mounted displays include speakers or headphones so that it can provide both video and audio output. Almost all sophisticated HMDs are tethered to the VR system's CPU by one or more cables -- wireless systems lack the response time necessary to avoid lag or latency issues. HMDs almost always include a tracking device so that the point of view displayed in the monitors changes as the user moves his head. (We'll examine tracking devices in a later section.)

Some systems use a special set of glasses or goggles in conjunction with other display hardware. In the next section, we'll look at such a system -- the CAVE display.

Ivan Sutherland, a scientist widely considered to be the father of virtual reality, described the ultimate computer display apparatus in 1965. He wrote that it would consist of a room where a computer controlled the existence of matter. The computer would be able to create virtual objects that, to a user inside the room, appeared to be real, solid matter. The writers of "Star Trek: The Next Generation" borrowed this concept and called it the Holodeck. Unfortunately, science fiction is as close as we can get to the ultimate display for the time being [Source: University of Utah, School of Computing].