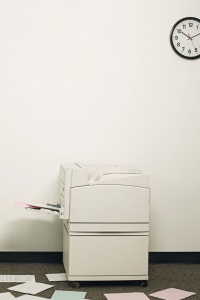 Imaging how much more appealing this drab scenario would be with a virtual view of Mount Fuji or Tahiti.
©Jupiterimages/Thinkstock

Virtual windows may sound like playthings for the rich and famous, or decorations for high-end corporate offices, but they do have some practical uses. We want, and perhaps even need, access to a view of the outside world, and we can't always get the real thing. Research show that people even seem to line their offices with more nature-related decorations to compensate when they lack a real view of the outdoors [source: Farley].

Aside from ventilation and a clue as to the time and weather outside, windows furnish us with light, color and distraction from the static and sometimes boring everyday indoor view. Windows can create energy problems and keep architects and designers from making the most efficient use of space, but being without them often causes a negative psychological response in a building's human occupants, including feelings of tension, isolation and depression [source: Farley]. This can be especially true in places like hospitals, schools and offices, where people tend to be stuck in one spot for long periods of time.

Access to windows, particularly with visible nature scenery, has a positive impact on work-related stress and employee satisfaction. It has also been demonstrated that window views of trees can aid in surgical recovery times and reduce the amount of painkillers taken by patients [sources: Farley, Ijsselsteijn]. And in one study, lack of windows in an intensive care unit resulted in more than double the number of cases of postoperative delirium, as well as a higher incidence of depression, compared to patients in windowed rooms [source: Farley].

More research needs to be done to determine if these findings hold equally true for the virtual variety of window, but there's already movement in that direction. The Open Window project mentioned earlier involved projecting still and moving artwork, nature scenes and images of personal interest onto the walls of the rooms of patients undergoing stem cell transplants -- a procedure that requires weeks of isolation for the patient in a sterile, windowless room. The experiment resulted in reduced anxiety and depression for patients participating in the project, compared with those without Open Window. Patients stated that the treatment experience was better than they expected it to be and that the "windows" provided distraction and feelings of connection to the outside world. [sources: Hegarty, McCabe].

Lots of medical and other offices are already adopting the still-image virtual windows to improve the view. With enough evidence of benefit, the moving variety might not be far behind.

Displays and other computing equipment are also becoming cheaper and cheaper, so smaller and less expensive virtual windows fit for a cubicle might be in our future. Who doesn't want to pretend their office is underwater?

This sounds really cool to me, especially given that I lost my window-side cubicle in an office move recently. And a virtual window or two would have been especially helpful when I worked in a windowless basement office years ago. A Mars landscape, complete with Curiosity wheeling around, would be fun, as would any number of earthly and otherworldly settings. I'd probably change them frequently while looking for a distraction from my normal computer monitor and my cloth-covered cubicle walls. I doubt my office will shell out the big bucks for something this novel, but, smaller, cheaper versions are bound to come out. Until then, I'll have to settle for fun desktop wallpaper landscapes. Or walking to the actual window.