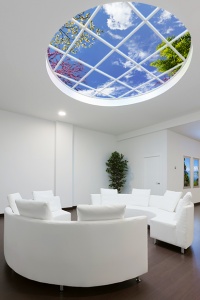 While many installations of virtual windows are in hospitals or other professional settings, they can bring the outside into private residences as well.
© The Sky Factory, L.C.

The moving variety of virtual windows can include either projected video or video displayed on high-definition television sets.

The projection variety exists more in the realm of do-it-yourselfers and academic researchers, at least at present. One industrious person has demonstrated setting up a bright, wide-angle projector on a balcony, connecting it to a computer and beaming various views through white curtains to liven up his indoor environment, including city, nature, underwater and space scenes, and even scary silhouettes of people [sources: Henry, Kawamoto]. And in a study dubbed the Open Window project, researchers set up projectors, computers and speakers to project still and moving artwork and nature scenes (with accompanying audio) onto the walls of rooms housing patients undergoing stem cell transplantation [sources: Hegarty, McCabe]. Both of these lacked the artifice of a window frame.

But video virtual windows are also already on the market. They mainly consist of high-definition televisions turned to portrait orientation, with window frames (and sometimes crossbars or shutters) to more closely mimic standard windows. Like their static brethren, they can be hung or recessed into walls or ceilings as windows or skylights. They can even be made up of multiple monitors as individual panes.

Once again, Sky Factory offers a variety of units that include one or more 40- to 46-inch (101.6- to 116.8-centimeter) 1080p high-definition LED edge-lit LCD monitors. They include window and mounting fixtures, a hard-drive based video playback unit (VPU) with around 8 hours of high-definition (either 1080p or UltraHD resolution) nature content and a wall mounted control panel to play, stop, pause and switch between scenes. Some models also include micro-class satellite speakers to provide audio. The available nature footage is shot on either the RED One 4K or RED Epic 5K cameras, which have also been used to shoot theatrically released films, and they include a variety of lake, mountain, sky, ocean, river and other natural landscapes, as well as a balloon festival and an aquarium scene. The available videos differ for each model. The company will custom build and install the units, and even shoot custom footage in some cases. The prices vary, but the basic systems run in the thousands of dollars.

Even very high-resolution video windows are missing one important element of realism. As you move, what you see out of a real window shifts, which is not the case with most static images or video footage. But there is a newer type of virtual window that takes this into account.