Of Mice and Monitors 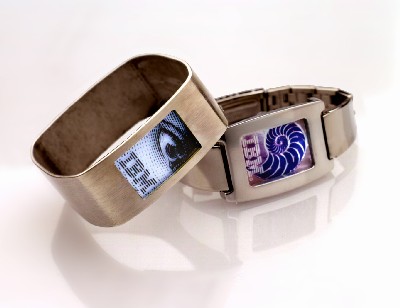 Two of the most identifiable components of a personal computer are the mouse and monitor. These devices are as familiar to us today as a television set. However, in the next decade, we could witness the disappearance of these devices, at least in their current form. Several companies, including IBM and Charmed Technology, are working on ways to create a head-mounted display. IBM is also working to shrink the computer mouse to the size of a ring and create a wrist-worn display.

The mouse-ring that IBM is developing will use the company's TrackPoint technology to wirelessly move the cursor on a computer-monitor display. You're probably most familiar with TrackPoint as the little button embedded in the keyboard of some laptops. IBM Researchers have transferred TrackPoint technology to a ring, which looks something like a black-pearl ring. On top of the ring is a little black ball that users will swivel to move the cursor, in the same way that the TrackPoint button on a laptop is used.

This TrackPoint ring will be very valuable when monitors shrink to the the size of watch face. In the coming age of ubiquitous computing, displays will no longer be tied to desktops or wall screens. Instead, you'll wear the display like a pair of sunglasses or a bracelet. Researchers are overcoming several obstacles facing these new wearable displays, the most important of which is the readability of information displayed on these tiny devices.

While IBM is in the development stage, Charmed Technology is already marketing its digital jewelry, including a futuristic-looking eyepiece display. The eyepiece is the display component of the company's Charmed Communicator, a wearable, wireless, broadband-Internet device that can be controlled by voice, pen or handheld keypad. The company says that the device could be ready for the mainstream market by the end of 2001 or early 2002. The Communicator can be used as an MP3 player, video player and cell phone. The Communicator runs on the company's Linux-based Nanix operating system.

The eyepiece above displays images and data received wirelessly from the Communicator's belt module.