Give Me a Ring 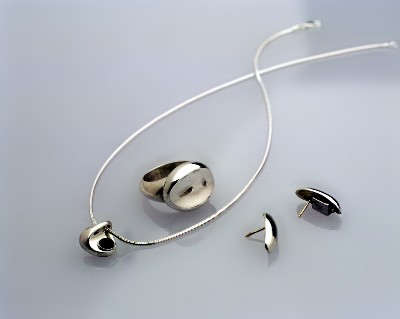 Cell phones will one day be comprised of digital accessories that work together through wireless connections.
Photo courtesy IBM

Soon, cell phones will take a totally new form, appearing to have no form at all. Instead of one single device, cell phones will be broken up into their basic components and packaged as various pieces of digital jewelry. Each piece of jewelry will contain a fraction of the components found in a conventional mobile phone, according to IBM. Together, the digital-jewelry cell phone should work just like a conventional cell phone.

Let's look at the various components that are inside a cell phone:

IBM has developed a prototype of a cell phone that consists of several pieces of digital jewelry that will work together wirelessly, possibly with Bluetooth wireless technology, to perform the functions of the above components.

Here are the pieces of IBM's computerized-jewelry phone and their functions:

With a jewelry phone, the keypad and dialing function could be integrated into the bracelet, or else dumped altogether -- it's likely that voice-recognition software will be used to make calls, a capability that is already commonplace in many of today's cell phones. Simply say the name of the person you want to call and the phone will dial that person. IBM is also working on a miniature rechargeable battery to power these components. Click here to see a RealPlayer video about IBM's digital-jewelry project.

IBM's magic decoder rings will flash when you get a call.
Photo courtesy IBM

In addition to changing the way we make phone calls, digital jewelry will also affect how we deal with the ever-increasing bombardment of e-mail. Imagine that the same ring that flashes for phone calls could also inform you that e-mail is piling up in your inbox. This flashing alert could also indicate the urgency of the e-mail. In the next section, we will look at an IBM ring intended to change the way you interface with your computer.