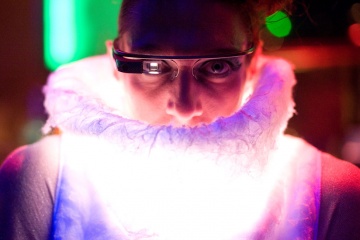 Will your near future be filled with augmented reality glasses and mood sweaters?
© Josh Edelson/AFP/Getty Images

With all of the obvious potential for wearable tech, you might wonder why these devices haven't already found a place in the mainstream. There are the usual pitfalls to predicting a product's popularity, and much of the discussion circles back to expense.

Digital versions of products we already have are obviously going to cost more to make. And manufacturers aren't keen on retooling their production equipment unless they're sure they can turn a profit on the end product. Consumers, for their part, might light up at the idea of owning a pair of pants that can charge their smartphone, but the concept might not be as exciting once they see the price tag.

There's also the balance between wanting and actually needing more technology. Sure, Google Glass may instantly offer up walking directions and restaurant reviews. But is it really a necessary evolution in consumer technology? Or is it just a way to stroke your digital ego and impress your Glass-less friends?

Then there are privacy and security issues. At this point, most everyone who owns a cell phone understands that privacy is perhaps a forgotten concept. Yet a health-monitoring device, hacked by a soulless offender, could expose very private information to the wider world.

And of course, there's the elephant in the room. Why stop at wearable devices? Why not just embed chips and sensors directly inside your skull? Implant a WiFi chip in your frontal lobe and your Internet connection becomes a lot more convenient -- and if you lose the password, the reset button is behind your right ear.

Kidding aside, wearable technology is an enticing adventure for anyone who uses digital gadgets. Perhaps one day soon you'll never have to worry about losing your phone again -- it will simply be built into your turtleneck.

I remember the struggles I had when I first took up golf years ago. My swing was a wreck and I was clueless as to fixing the problem. There were no digital cameras to record my swing, so I was left trying to understand why my ball continually wound up flying hundreds of feet in the wrong direction. A wearable sensor and related smartphone app (and video feedback from the same phone) would have literally been a game changer. Instead of grasping at straws wondering which body part was out of alignment, I would have known immediately that my hip rotation was too short. That's just one small promise of wearable tech. Consider me on the bandwagon.