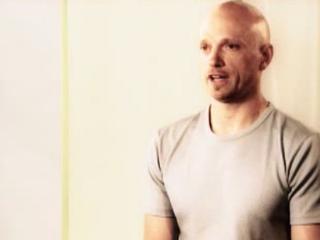 Personal trainer and motivational speaker, Jonathan Ross explains how fitness activities don't have to be specific to a gym environment.
Discovery Health

We grumble. We procrastinate. We try fad diets. Of course, ultimately, weight loss comes down to burning more calories than you consume. But working out can be tough! Building up the motivation to exercise is the first great hurdle. Since the 2000s, technology has started to do its part in getting us up off the couch, out of the office and into the park for some bodily movement. Nike was one of the first companies to offer exercise tracking technology with Nike+, which uses a motion sensor to track the wearer's workout sessions and automatically catalog important information like calories burned, distance traveled and time spent working up a sweat.

Nike+ and other exercise tracking systems are designed to motivate you. Nike+ lets you set goals for your workouts, helps you promote your successes to social networks and features friends lists so you can challenge your pals. When you can't have a workout buddy, being able to post scores and compete with your friends is the next best thing. Beyond motivation, these devices make exercising simpler. You're still going to have to put in the physical labor, but they'll take care of the number crunching by timing your workouts and figuring out how much exercise you're actually getting.

Nike+ began as a collaboration between Nike and Apple that worked with iPods, but it's since grown to include a number of devices like the Nike+ SportWatch GPS, FuelBand and SportBand. The SportBand was Nike's first addition to the Nike+iPod product line. What does that mean? Well, it's cheaper -- and a bit more limited -- than some later Nike+ accessories like the SportWatch. The SportBand is essentially a convenient display for exercise tracking data. Without a separate Nike+ sensor, it can't track your steps or burned calories -- it's just a digital watch.

At only $59 as of mid-2012, the SportBand is appropriately cheaper than the rest of the Nike+ line. We'll get into the why on the next page with the SportBand's hardware, then move onto the calorie-counting software and comparisons between the SportBand and Nike's newer FuelBand.

The Nike+ SportBand consists of two separate components. One of them is very, very simple. It's a rubber watch band. Just like any other watch band, pretty much, but with one exception: opposite the watch band holes is a small rectangular socket in the rubber. This slot is what secures the second component of the SportBand, which is actually a USB thumb drive. While the SportBand is water resistant, using the buttons underwater or exposing the SportBand to hot steam can be damaging. The thumb drive is made from curved plastic so it neatly rests atop the watch band, and it houses the SportBand's LCD display and a pair of control buttons on its surface.

The LCD can function as a plain digital watch, but its primary goal is to convey exercise information via a calorie counter, timer, distance gauge and pace meter. The button beside the display will start up exercise tracking, while a toggle button on the side of the device switches between functions. The SportBand's rechargeable battery lasts an estimated three weeks of daily one-hour workouts, while the memory is able to hold 30 hours of running data. The display is backlit, and the SportBand includes a 2.4GHz wireless receiver, but no transmitter.

That sums up the SportBand hardware: Unlike other exercise trackers, it doesn't contain a pedometer to track steps or an accelerometer to more accurately gauge movement. It also doesn't wirelessly upload information to the Nike+ Web site to allow you to see your exercise information -- you have to connect the detachable USB thumb drive to a computer to sync the data it collects.

By itself, the SportBand can't track your workout sessions. But the $59 band comes with a Nike+ sensor, which fits into any Nike+-ready shoe. This is where the wireless receiver comes in: The Nike+ sensor tracks your movement and transmits it to the SportBand. The sensor uses an accelerometer to track the motion of your foot and translate that into a step. Officially, the sensor fits into the insole of Nike+ shoes. Unofficially, you can use it with any running shoe by cutting a hole in the insole, stuffing it into the shoelaces or attaching it with tape.

The real draw of Nike+, of course, is what the software does with your exercise data.

We touched on the SportBand's simple LCD display on the hardware page, but it's obviously a key element of the software experience on the exercise tracker. There's not much to do on the SportBand itself, other than toggle between the display modes to see information about your current exercise session. The real Nike+ experience comes into play on a computer or mobile device. Nike offers a piece of software called Nike+ Connect for Mac and Windows. When the SportBand USB drive is plugged into a computer, it will dump its exercise data into that software, giving you access to charts, graphs, Nike+ friends and personal goals.

Nike+ information is available online, as well, making it accessible from any computer or mobile device with a Web connection. The software is free to download and use -- there's no membership fee for Nike+. The Web service allows you to set goals for exercise routines, like running faster or farther. It will help you keep track of calories burned and calorie goals. Nike+ also includes map data to plan runs and find easier or more challenging routes, depending on your preferences.

While you get immediate feedback from the Nike+ SportBand via the LCD as you run, you'll need to use the computer software or Web site to see data on previous workouts or interact with the Nike+ community. Some of Nike's other sports training devices, including the SportWatch GPS and the FuelBand, offer more functionality on their displays. We'll tackle those software differences on the next page.

As of early 2012, there are more than 5,800 apps available to help you track your health and fitness [source: MobiHealthNews]. 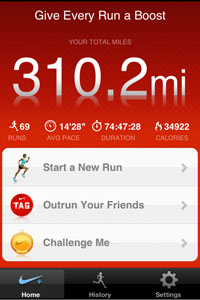 It's an interesting time for sports gear, which made comparing the SportBand and newer Nike+ devices interesting. Everything's changing as accelerometers become commonplace in smartphones. There's a lot of competition in exercise tracking between the Jawbone Up, the Fitbit and Nike+. The SportBand has been around for years, and I think the new Nike+ FuelBand is more interesting -- it tries to abstract calorie counts and the stuff we get so hung up with and replace that with a more rewarding system. "Gamification" is an interesting phenomenon, and competition and rewards can lead to great results. Still, we risk running into a problem: working for the arbitrary reward instead of the end goal itself.