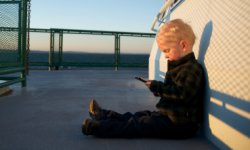 Is your 2-year-old a little too attached to your smartphone?
Aaron McCoy/Photographer's Choice/Getty Images

Toddlers are increasingly taken with their parents' iPhones, and many experts and parents wonder whether that's a good idea. Some see it as a harmless distraction or an educational tool, but others think it's just another form of screen time that interferes with how normal toddlers should be encouraged to develop. Toys like blocks and balls gather dust while apps and videos get all the attention.

But what if it were possible to have it both ways? What if kids could use their iPhone savvy to operate and engage with physical toys? The excitement that surrounds the iPhone often translates into peripheral developments. Companies continually pop onto the scene to design and craft nifty additional products that iPhone owners can enjoy. Often, these app-controlled toys are designed to make life easier or to cater to a particular hobby or pastime, but sometimes they're purely for fun.

Of course, not all the toys in this list would be toddler-friendly -- some are geared to the inner child -- but in the future, who knows? For now, find out what the world of gadgetry has to offer in terms of toys. 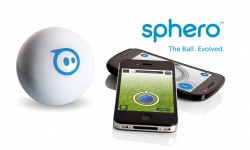 The AppBlaster is an interactive gaming gun. To use it, you insert your iPhone into the housing dock located on the AppBlaster's barrel, which allows you to then play an assortment of shooting games available through iTunes. Some games are free, while others cost a little bit of cash. Visually reminiscent of the gun offered with the Nintendo Entertainment System (NES) -- the bane of all the birds in Duck Hunt -- the AppBlaster allows players to put aliens and other shootable quarry in their place. The app runs through the iPhone's camera and, unlike many toys for the iPhone, it doesn't make use the mobile's accelerometer. Instead, every time a shot is fired, it triggers the AppBlaster to actually tap the screen. You see the real world around you through the camera interface, but your chosen foes invade that space to create an adventure in augmented reality.

iRemoco is a gyrostabilized helicopter that uses the iPhone's accelerometer to navigate. With the controller and the app, users can steer the helicopter with 3-D touch screen joysticks or with motion-based controls. Using three separate channels, one iPhone can pilot up to three helicopters at one time (they're sold individually and as a set). If set to the same channel, all three can be thrown in synchronization. The helicopters can fly for 4-to-6 minutes at a time when fully charged, and have a range of about 30 feet (10 meters) from the iPhone that's flying them.

Next up, we'll take a look at another innovative aircraft for the iPhone to command. 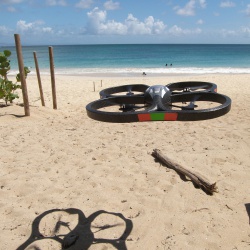 The AR.Drone has two available outer hulls, one better for outside use, the other optimized for indoor flying. This photo shows one of them in action.
Photo Courtesy AR.Drone and Parrot

The AR.Drone is a carbon fiber quadricopter consisting of four motors that allow this aerial device to hover in place or zip through the air. It comes equipped with forward- and downward-aiming video cameras capable of live streaming, and it can capture still shots as well. All of this visual aerial footage is transmitted directly to the iPhone that's operating it, which doubles as the remote control for the device. The AR.Drone can travel up to about 11 miles per hour (18 kilometers an hour) but the running time is limited to about 12 minutes.

If you lack confidence in your ability to launch and land the drone, you can also put it into autopilot mode. If the iPhone loses the Wi-Fi connection or a phone call comes in while the drone is up in the air, autopilot takes control in those situations, too. Apart from solo flights, AR.Drones can also interact with and battle each other in various ways, including registering successful virtual strikes against combatants.

Up next, a device that's fun for humans, as well as their feline friends.

Tankbot, a member of the Desk Pets portfolio of toys, is a diminutive and almost anthropomorphically cute tank that can be activated in a variety of modes. You can drive it via remote control with an app on the iPhone through an operating procedure similar to that of a zero-turn lawn mower (which you learn more about in How Zero-turn Mowers Work). Or you can set it up to automatically navigate a maze of office supplies that you construct, like stacks of files, coffee mugs, pen holders, computer accessories or any other objects you have on hand to build an obstacle course.

When roaming free, if it approaches an impediment, the two lights that shine like eyes from the front panel of the tank grow large in surprise and the toy proceeds away from the collision course. If there's a barrier on only one side of the tank, just one eye bugs out in alarm. Gadget lovers will find themselves rooting for this little guy as he tries to find the path of least resistance. Just ensure he meets no cliffs, as Tankbot it unable to detect dangerous desk edges.

For more iPhone goodness, check out the next page.