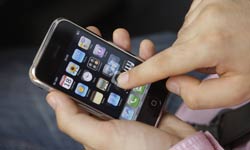 It seems like it was only a few years ago when cell phones began to find their way into the pockets and purses of the mainstream population. In reality, it's been more like a decade and a half. Who can ever forget the Motorola's StarTAC clamshell flip phone which debuted in 1996 and set the world into a frenzy over flip phones? It was small, sleek and resembled something out of a James Bond flick.

Times have obviously changed. Cell phones have gradually become smaller, loaded with more features and even more colorful -- the StarTAC and rival phones were often black or gray. With the advent of the MP3 player (around the same time in 1996), the two technologies seemed destined to collide.

These days, technology has evolved to the point where imagination is the only thing slowing the gadget world down. Yet it seems like even our imaginations are running more and more rampant. The result: smartphones.

In the give-it-to-me-now world of communications, smartphones have replaced cell phones, MP3 players, global positioning systems (GPS), personal data assistants (PDA) and in some cases, even computers. That's because phones like the Apple iPhone can do it all.

The iPhone truly is the essence of a smartphone. Good looks, user-friendly interface and capabilities beyond the imagination of most who wield one on a daily basis are many of the attractive attributes that have made Apple's new little gem so popular. Full Internet capabilities, e-mail, GPS, and of course an integrated iPod are just some of the features packed into each iPhone. And for the last several years, independent companies have been able to develop applications (apps) that take full advantage of these features and more.

In this article we will look at iPhone applications available for your car. We know that you're probably thinking, "What's the big deal? Any app on an iPhone is accessible in the car." However, these 10 apps are specifically designed around motor vehicle operation. They cover a wide range of features and functions. Some are practical while others are just downright fun. So here are, in no particular order, the top 10 car-related iPhone apps.