5 Things to Look for When Buying an AV Receiver 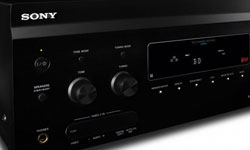 Receivers vary greatly in price, so a bit of homework ensures you don't buy a model with features you'll never use.
Sony Electronics

So you spent more than a few paychecks for an HD/plasma/3-D TV so large that you could watch it from down the street, along with a new set of human-size speakers and a 150-disc CD/DVD/Blu-ray/iEverything player so your neighbors can hear it across the street, too. All you have to do now is pop some corn, grab a cold one and prepare for entertainment bliss, right? Not so fast.A big, movie theatre-quality TV and supped-up speakers are definitely nice, but to get the most out of your home entertainment equipment, you also have to invest in a quality receiver.

An AV (audio/video) receiver serves as the hub of a home theater system, connecting speakers with various components. It handles a wide variety of tasks: powering speakers, tuning radio stations, switching between audio and video components and decoding signals for surround sound [source: Bar].Not all AV receivers are created equal, though. Here are five things to look for when picking out the unit of your dreams. 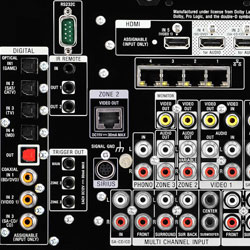 Count your TV, DVD player, gaming system, speakers and any other electronics so you know the minimum number of connections you'll need in the receiver.
Sony Electronics

The reason for this one is simple: the more inputs and outputs -- or places to connect to the receiver -- the more components (TV, speakers, iPod, gaming system) the device can accommodate. For example, a receiver may accept sound signals from a TV via an input and send it to speakers via an output. You should have enough inputs and outputs to handle all of your equipment, as well as a few extra in case you want to expand later.

The number of connections isn't the only thing to consider here; they must also be the right kind. Unless the components that will be connected to it are old (an analog TV or record player, for example), the receiver should generally offer digital connections, which provide better video and audio quality than analog inputs and outputs. To get the most out of your high definition equipment -- and in many cases to use it at all -- it should be connected to a receiver using an HDMI (High-Definition Multimedia Interface) connection [source: Bar].

Measured in watts, power isn't merely another word for volume. It also determines a receiver's ability to deliver detailed and dynamic sound. Indeed, a high-wattage receiver provides better sound quality than one with less power, even at low and medium volumes.

It's important that the receiver be powerful enough to accommodate both the speakers to which it's connected and the room in which the receiver is located. The power needed to match specific speakers depends on speaker sensitivity: the number of decibels (volume) it puts out per watt of power. Lower sensitivity speakers require more power. Additionally, the larger the room in which an entertainment system is set up, the more power needed [source: Bar].

Choosing a proper receiver largely depends on how it will be used. A home theatre receiver is designed to allow users to enjoy surround sound. A stereo receiver, on the other hand, is a more simple and less expensive unit for music lovers and those who aren't necessarily looking to turn their living room or basement into a Cineplex [source: Scoblete]. 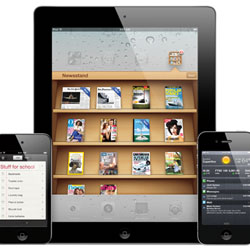 Before you get a receiver with AirPlay technology, verify that the version of the iPad, iPhone or iPod you own has wireless streaming capabilities.
Apple Inc.

AirPlay compatibility is one the latest bells and whistles offered in many new receiver models. The technology allows users to wirelessly stream music from an iOS device (iPhone/iPad/iPod Touch), as well as from digital apps like Pandora, directly to the receiver [source: Moskovciak].

If most of your music is stored on one of these devices, AirPlay may be worth the extra money. If, however, you prefer the comfort, character and feelings of nostalgia that come with enjoying music on vinyl -- or you still have a lot of music on CD or even tape -- then save yourself some bucks and skip this option.

Many receivers make that job a bit easier by offering automatic speaker calibration, which allows the receiver to analyze and automatically adjust the sound of connected speakers. By sending test tones to the speakers and subwoofer and monitoring the sound using a microphone, the receiver can determine speaker size, measure the distance from each speaker to the listener and check whether the components are properly connected. The technology works for both surround sound and traditional two-channel home entertainment systems [source: Guttenberg].

Short, powerful sound bursts (like a string of explosions in a high-budget action movie) and other special effects can sap a receiver's power. If your receiver has high-current power, however, it will reproduce those sounds better than a similar receiver that doesn't, even if it has the same wattage [source: Bar].

A high-tech receiver with all the freshest trappings is worth nothing if you can't figure out how to use it. An easily navigable receiver display panel can be the difference between enjoying stadium-quality sound and pictures or watching your expensive system collect dust because you can't figure out how to turn it on. When browsing receivers, it's important to tool around with the display to make sure you can navigate it and understand all the functions. Quality receivers generally include a graphical interface -- the on-screen viewer through which a user sets up and operates the receiver. If used with AirPlay, the viewer should also display album art and song information as it plays music.