by Cherise Threewitt
Prev NEXT
4 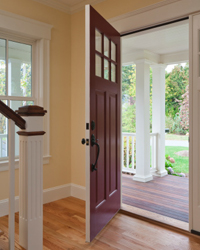 Thanks to Bluetooth, the Phantom Keyless Home Entry System automatically recognizes your phone when you're within range and unlocks the door for you.
David Papazian/Stockbyte/Getty Images

Automotive keyless entry was, initially, exclusive to the luxury sector, but gradually trickled down as consumers grew accustomed to the idea. Unlocking a car with a wireless transponder requires a certain leap of faith (so many things can seemingly go wrong). Surrendering your home's security to airborne data seems like another beast entirely, but it was only a matter of time. As consumers put more trust in their phones, they seem ready to abandon the tactile satisfaction of feeling tumblers click in a lock as the key is turned.

Thus enters the Phantom Keyless Home Entry System. Thanks to Bluetooth, the system automatically recognizes your phone when you're within range and unlocks the door for you -- you don't need to fire up an app, push any buttons or even pull your phone out of your pocket. When you close the door, it automatically locks behind you, so you won't have to worry about forgetting to lock up.

Because your original door handle stays intact, you can keep your regular key as a backup and there's no telltale signs to attract potential intruders from a distance. (A small transponder does need to be installed near the lock, but Phantom says it can be easily camouflaged to blend in with your home's exterior.)

Any Bluetooth-capable phone is capable of being paired to the device (since the system doesn't rely on apps, even older non-smartphone mobiles will work), and the Phantom system will only open for phones you've authenticated. There's no limit to how many phones you can pair to your system, which makes it easier to give emergency access to friends or neighbors -- and it's more secure than leaving a key under the flowerpot. If the security is ever breached (like if a family member's phone is lost) the system can be reset quickly.

On the next page, we'll show you how Bluetooth can help keep your important data close at hand.