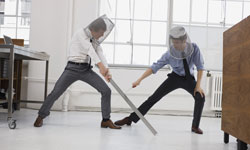 Your office fun doesn't have to be this archaic.
Sean De Burca/Riser/Getty Images

Your office workspace bites. Sure, the pet photos are very humanizing, and your assorted action figures really let us know you're a kid at heart. But don't you think it's time you took office toys seriously? If you're ready to inject a little high-tech fun into your work life, this list should get you off to the right start.

Go ahead and trash those stress balls and return your company-issued swag back to the PR department from which it came. Human civilization has risen to dizzying heights of scientific discovery, venturing into the stars and even glimpsing the fundamental building blocks of life itself. We've also created the most sophisticated farting novelty toys the world has ever seen.

First up, let's kick things off with some office warfare. 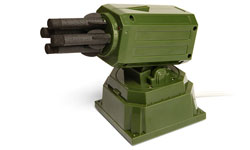 Who will be blasted first?
Image courtesy Amazon.com

The average workplace is a hotbed of repressed aggression. If left to fester, these emotions are bound to explode in a highly inappropriate manner. Fortunately, there's a way to relieve these tensions. It's called office warfare, and it's as simple as blasting your co-worker with a Nerf cannon during a conference call.

Sure, today's Nerf guns are crazy sophisticated, but we're living in the computer age, so get with the arms race already. If you're in the market for a USB-powered desktop missile launcher, you can actually choose between a handful of different products priced between $15 and $50. Install the launcher's software on your work computer and you can actually aim and fire the foam projectiles without lifting a finger from your mouse and keyboard. Some models even boast laser sighting.

My Keyboard Is Made of Lasers 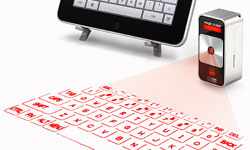 Spill coffee on your keyboard all day without consequences.
Image courtesy Amazon.com

Why do you still waste your time with a physical computer keyboard? It's the 21st century! User interface devices like that should be either in a museum or nailed to the walls of a funky New York coffee shop. Get it off your desk now and replace it with lasers already.

What's that? You don't think we can build a keyboard out of light particles that amplify a stimulated emission of radiation? Brace yourself, grandpa, because here comes a shocker: The Cube Laser Virtual Keyboard is already on the market. For roughly $170, you can fire up this wireless, palm-sized device and let it project a full-size laser keyboard onto any flat surface. A built-in sensor picks up on your finger movements as you type, and a tiny speaker even belts out some clacking noises to make everything feel authentic.

A laser keyboard may feel a bit too work-related for some of you. Before you reach for that low-tech squeeze ball, consider the awesomeness of Buckyballs.

Buckyballs to the Walls 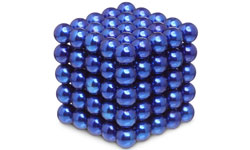 Not to be confused with nanotechnology's molecule-sized carbon "buckyballs," Buckyballs magnetic building spheres exist on a scale that makes sense for office stress release. Available in packs of 125 for around $25 or 216 for around $35, these tiny magnetic pellets can be clustered and molded into varying shapes, from spheres to wearable jewelry. You can form them into patterns and tubes. You can buy them in silver, gold, chrome, black or various other colors, and there's even a Buckycube product for the square-minded among you.

Building with Buckyballs provides all the tactile stress release of your old squeeze ball, only with more creative freedom and the power of magnetism.

Ah, but maybe you want something a little more constructive for your office workspace. If so, then this next entry should straighten you out. 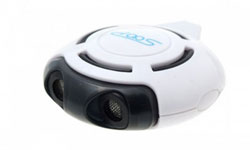 Let this guy boss you around.
Image courtesy Gizmag

Sure, posture is important -- we all learned about it in grade school -- but who has time for it in the modern workplace? We all have deadlines to meet and schedules to keep, and optimal spinal alignment has a way of falling down the priority list. What if there were an office gadget to keep track of our posture for us?

Enter the USB Posture Alert Reminder, a palm-size monitor that plugs into your computer and sits atop the screen in front of you. Using ultrasonic waves, the device senses your position in relation to the screen and audibly berates you should you hunch too close to the monitor or recline too far away. If you start to dip too far in either direction, an LED light on the unit will give you a good flashing, so keep it straight! All of this can be yours for roughly $20.

If you're not looking to invest in another plastic hassle for the workplace, we'll explore your groovier options next.

Not Your Grandpa's Lava Lamp 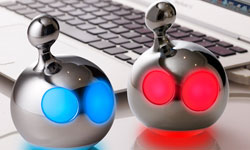 Blob and Flow are ready to play good cop/bad cop with your productivity.
Image courtesy Mathmos

Face it: You want a lava lamp. You might think you're past that stage. You may disparage everything the hippie movement ever stood for, but there's no denying the appeal of glowing blobs of floating wax. Sure, you can buy a lava lamp for your desk at work. You can even buy one that plugs into your computer's USB port. Or you can take your need for groovy light toys one step further and buy Mathmos' Blob and Flow.

Mathmos is a British company founded in 1963 by Edward Craven Walker, the inventor of the lava lamp. The company still manufactures the lamps to this day, but it also offers a pair of touch-sensitive light pets by the name of Blob and Flow. Each pair of pets runs between $75 and $100 and consists of a silver lump that vaguely resembles a lump of lava lamp wax. Oh yeah, and they have glowing eyes. Plug one of the pets into your USB or a wall outlet, and you'll feel its tiny heart beating. Touch its "skin," and its eyes will come to life as well. Additional touches will induce winks, slumber or a "moment of madness." Oh, for cute's sake!

If Blob and Flow aren't high-tech enough for you, then perhaps it's time we went nano. 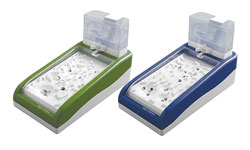 Nanotechnology! It enables us to build superstrong materials and design life-saving medications. Thanks to the Japanese company Bandai, it also allows us to kill time at our desks.

Yes, the product is called Aqua Dance Game, and it's a lot like those little hand-held games that require you to roll tiny metal balls through a hole-riddled maze. Only instead of metal balls, Aqua Dance uses hyper-beading water. See, the interior of the water game features a patented nanomaterial called "Adesso WR," the microscopic, low-friction structure of which causes water molecules to bead together and slide along at faster-than-normal speeds.

You just pump the water through by hand and watch the strange beads race around like crazy all for the low, low cost of $40. What's that you say? You think the games on your iPad and iPhone rock harder? Then quit pussyfooting around and turn your desk into a gaming zone already. 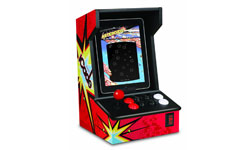 Transform your iPad into a primitive form.
Image courtesy Amazon.com

Sure, the games on your iPhone and iPad are fun, but don't you feel a little dirty playing them secretly at your desk? Don't game like a mouse; game like a lion by turning your workspace into a Vegas-style gaming zone.

For starters, the Slot Machine iPhone Dock ($40) features a little lever to increase the realism on your one-armed bandit apps. Slide your iPad into an arcade cabinet-shaped iCade ($80), and any game becomes a retro celebration of gaming history. Finally, you can stick your iPhone into the Appgun ($28), a plastic toy gun that allows you to play gyroscopic first-person shooter games in augmented reality.

Are we going a bit fast for you? Stay tuned for a seriously high-tech pet rock coming your way next. 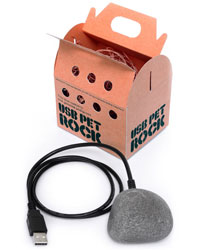 Seriously, there's not much to this one.
Image courtesy ThinkGeek

If you're old enough to remember the 1970s pet rock fad, then congratulations on being really, really old. But don't fret! Instead, why not update this fad and prove your youthful vigor to the entire office with a modern take on the pet rock that plugs into your computer's USB port?

The classic pet rock just sat there on your desk, a testament to marketing and human gullibility. The modern version does exactly the same thing for $10, while also tying up one of your USB ports. When co-workers ask about your new pet, just make something up. Ask if they can feel the USB-generated heat or hear its barely audible laughter when you shake it. Tell them it's made out of nanomaterials. Have fun with it.

Want something practical and chock-full of sci-fi awesomeness instead? Well then the next two entries should knock your work socks off.

Sure, the office toys of today are awesome, but 10 years from now they'll be even better. Just consider MIT student Nathan Linder's amazing LuminAR robotic lamp.

Boasting the computerized powers of a lamp, pico projector (a hand-held projector) and webcam, the LuminAR watches your every movement on the desk and moves itself into a complementary position with a robotic arm, projecting your computer screen or even a usable keyboard directly onto your workspace. It will even work around your desk clutter.

You won't find this technology in the store just yet, but rest assured that your future office will be fantastic -- or even holographic. Turn to the final entry in this list to learn more. 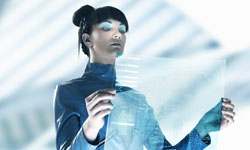 Is this the future of office work?
Colin Anderson/Photographer's Choice/Getty Images

What if everything on your desk was a hologram, from the photo of your spouse and your keyboard to the tiny Princess Leia who insists on calling you "Obi Wan." Imagine your entire workspace as interactive illusion. Much of the necessary technology already exists, such as the motion-sensing Kinect interface for Microsoft's Xbox 360 gaming system. In fact, Microsoft is already developing this technology into tomorrow's HoloDesk.

Microsoft's OmniTouch technology will allow future cube farmers to use projected touch screens on any flat surface and the HoloDesk system, not unlike the laser keyboard and LuminAR lamp discussed earlier. But as illustrated in videos released by Microsoft's Research department in October 2011, HoloDesk technology allows users to manipulate holographic 3-D images as if they were real.

In other words, the workspace of the future will be amazing -- and so will the pet rocks.

Go crazy for more gadgets and complete wastes of time on the next page.