How Jawbone UP Works 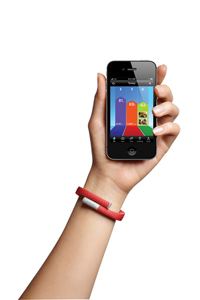 The Jawbone UP is a system that's one part wristband and one part iOS app.
Courtesy Jawbone

In late 2011, Jawbone had a problem. Customers who bought UP wristbands began calling the company to report gadget failures. According to Jawbone, the problem was with some capacitors inside the device.

A basic capacitor consists of two conductive plates with a nonconductive material called the dielectric between the two. In a simple circuit, one plate connects to the negative end of a battery -- this is the end of the battery that generates electrons. This means the plate gains electrons and as a result gains a negative charge. The other plate connects to the positive end of the battery. Electrons from this plate travel to the battery, leaving the plate with an overall positive charge.

In 2011, several UP wristbands suffered capacitor failures. Some had trouble holding a charge, which meant that the wristbands couldn't track data accurately. Others couldn't hold a charge at all, leaving the wristband bricked or useless. The problem was so widespread that Jawbone CEO Hosain Rahman issued a letter on the Jawbone Web site explaining the company would refund any customer's purchase. He reaffirmed the company's desire to ship products that worked as advertised and thanked customers for their support [source: Jawbone].

The real problem for Jawbone might not be faulty capacitors. The gadget market appears to be flooded with fitness devices. Companies like Motorola Mobility have entered the fray along with startups like Striiv. Is there a place for an iOS-specific fitness accessory? Or will other gadgets push Jawbone's UP system to the side? In the weight-loss gadget world, it's survival of the fittest.