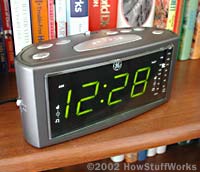 Chances are that in your bedroom you have a digital clock beside your bed. Have you ever looked at it in the morning and wondered how it works?

To understand how a digital clock works, you have to get inside and see what's going on. So let's get started!

If you have read How Pendulum Clocks Work, you know that all clocks (regardless of technology) have a few required components:

Here is a quick overview of the components of a digital clock at a high level.

At the heart of the clock there is a piece that can generate an accurate 60-hertz (Hz, oscillations per second) signal. There are two ways to generate this signal:

The 60-Hz signal is divided down using a counter. When building your own clock, a typical TTL part to use is a 7490 decade counter. This part can be configured to divide by any number between 2 and 10, and generates a binary number as output. So you take your 60-Hz time base, divide it by 10, divide it by 6 and now you have a 1-Hz (1 oscillation per second) signal. This 1-Hz signal is perfect for driving the "second hand" portion of the display. So far, the clock looks like this in a block diagram:

The output from this stage oscillates at a frequency of one-cycle-per-minute. You can imagine that the minutes section of the clock looks exactly the same. Finally, the hours section looks almost the same except that the divide-by-6 counter is replaced by a divide-by-2 counter.

Now there are two details left to figure out if you are building a real clock:

Now let's see what we have to do to build a real clock!

Building Your Own Digital Clock

The best way to understand the different components of a digital clock and how they work together is to actually walk through the steps of building your own clock. Here we will build just the "seconds" part of the clock, but you can easily extend things to build a complete clock with hours, minutes and seconds. To understand these steps, you will need to have read How Boolean Logic Works and How Electronic Gates Work. In particular, the electronic gates article introduces you to TTL chips, breadboards and power supplies. If you have already played around with gates as described in that article, then the description here will make a lot more sense.

The first thing we need is a power supply. We built one in the electronic gates article. That time, we used a standard wall transformer that produced DC (direct current) power and then regulated it to 5 volts using a 7805. For our clock, we want to do things slightly differently because we are going to extract our 60-Hz timebase from the power line. That means that we want an AC rather than a DC transformer, and we will use a part called a bridge rectifier to convert the AC to DC. Therefore, we need the following parts for our power supply:

A few notes on the parts used:

Here's a circuit diagram for the power supply and time base.

As we saw in the article on electronic gates, the power supply is the most difficult part!

To create the rest of the clock you will need:

The number of chips, resistors and LEDs you need depends on how many digits you are interested in implementing. Here we will discuss only seconds, so the "at least" numbers are correct.

The 7490 is a decade counter, meaning it is able to count from 0 to 9 cyclically, and that is its natural mode. That is, QA, QB, QC and QD are 4 bits in a binary number, and these pins cycle through 0 to 9, like this:

Knowing all of this, you can easily create the "second hand" of a digital clock. It looks like this:

In this diagram, the top two 7490s divide the 60-Hz signal from the power supply down by a factor of 60. The third 7490 takes a 1-hertz signal as input and divides it by 10. Its four outputs drive normal LEDs in this diagram. The fourth 7490 divides the output of the third by 6, and its three outputs drive normal LEDs as well. What you have at this point is a "second hand" for your clock, with the output of the second hand appearing in binary. If you would like to create a clock that displays the time in binary, then you are set! Here is a view of a breadboard containing a divide-by-10 counter, a divide-by-6 counter and a set of LEDs to display the output of the counters in binary:

If you pack things tighter and do a neater wiring job, you can fit up to four counters on a single breadboard.

Displaying the Time as Numerals

If you want to display the time as numerals, you need to use the 7447s. Here is the pinout of a 7447, as well as the segment labeling for a 7-segment LED.

You will need to have the pinout for the specific LED display that you use so that you know how to wire the outputs of the 7447 to the LEDs in the 7-segment device. (Also, note that the 7448 is equivalent to the 7447 except that it drives common-cathode displays. Ground the common cathode of the LED in that case.)

You can see that by extending the circuit, we can easily create a complete clock. To create the "minute hand" section of the clock, all that you need to do is duplicate the "second hand" portion. To create the "hour hand" portion, you are going to want to be creative. Probably the easiest solution is to create a clock that displays military time. Then you will want to use an AND gate (or the R inputs of the 7490) to recognize the binary number 24 and use the output of the recognizer to reset the hour counters to zero.

The final piece you need to create is a setting mechanism. On a breadboard, it is easy to set the clock -- just move the input wires to drive higher-frequency signals into the minute-hand section of the clock. In a real clock, you would use pushbuttons or switches and gates to do the same thing.

If you happen to take your bedside clock or watch apart, one thing you will notice is that there are probably not 15 TTL ICs inside. In fact, you may not be able to find a chip at all. In most modern clocks and watches, all of the functions of the clock (including the alarm and any other features) are all integrated into one low-power chip (in a watch, the chip and display together consume only about a millionth of a watt). That chip is probably embedded directly into the circuit board. You might be able to see a blob of black plastic protecting this chip. That one tiny chip contains all of the components we have discussed here.

Now you have a complete understanding of how digital clocks work. The next time you look at the clock beside your bed or at your digital wristwatch, you can do so with a new respect for what is going on inside! If you would like to advance to the next level and see how to build a digital clock with a microcontroller, see How Microcontrollers Work.

For more information on digital electronics and timekeeping, check out the links on the next page!