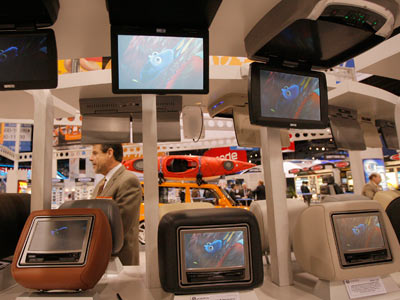 So, after reading all of this, you're still not sold on headrest monitors? Well, they are expensive to install compared to other systems, and in fact, they may not work for all cars. But what are your options?

­Ceiling-mounted monitors are a popular alternative to headrest monitors. Not only are they offered as factory-installed options on many cars, including several non-luxury cars, but they're less expensive as aftermarket accessories as well. However, the diminished costs often bring some diminished capabilities, too. Though ceiling-mounted monitors are usually larger than headrest monitors, they can only show one type of media at a time. That means that passengers will have to agree on what they choose to watch. Also, the same audio concerns that apply to headrest monitors apply to ceiling monitors. If the driver doesn't want to hear the audio of what passengers are watching, look for a system that offers headphones.

Another alternative to headrest monitors are in-dash monitors, which put a video screen in the car's dashboard. While this setup makes it tough for rear passengers to watch the media, it allows the driver and front passenger to watch media -- something they can't do with ceiling and headrest monitors, both of which are mounted behind the first row of seats. Dash monitors usually combine some entertainment capabilities with navigation or review camera functions. While it's nice that the driver and front passenger can use dash monitors, it has its limitations: The monitor will not display DVD or video game media unless the vehicle is in park. If you drive a manual transmission-equipped vehicle, most systems require you to apply the emergency brake first. This is a safety feature designed to avoid distracting the driver. While other system manufacturers haven't taken the technology quite this far, Mercedes-Benz offers an in-dash monitor with split-screen capabilities. The driver sees the navigation system while the passenger can watch a DVD [source: U.S. News Rankings and Reviews]. Even without the luxury of a split-screen, in-dash monitors are a good option for drivers and passengers who often end up waiting in the car for extended periods of time.

If it seems like in-car entertainment technology has exploded, well, it has. With DVD players, gaming systems, and even WiFi systems, cars and trucks have come a long way from entertaining passengers with only the passing scenery and a scratchy radio. Headrest monitors are just one of several ways to keep your passengers happy.

If you'd like to read more about automotive electronics and other related topics, follow the links below.