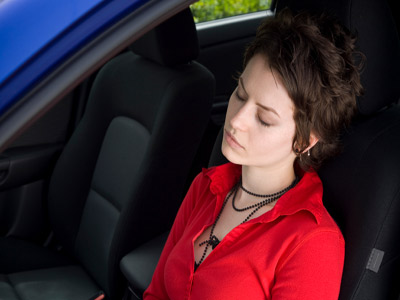 Car Gadgets Image Gallery Falling asleep at the wheel can be dangerous for everyone on the road. See more pictures of car gadgets.
Nir Schindler/©iStockphoto.com

Everyone knows about the alarms that abruptly wake us from our slumbers each morning, but have you heard of alarms that can keep us awake while we're driving? Anti-sleep alarms do more than simply startle and annoy drivers -- they can save them from fender benders or worse by alerting them if they start to nod off behind the wheel.

There are two types of anti-sleep alarms. The first type of alarm is built right into the car and uses sensors, cameras and other high-tech tricks to discern a driver's fatigue and correct the problem accordingly. The second type fits over the driver's ear and sounds an alert when the driver starts to fall asleep. While the in-car alarm systems are a recently developed feature that can add thousands of dollars to a car's sticker price, the over-the-ear alarm is both cheap and readily available. Drivers can find these for $10 to $20 under brand names like Nap Zapper, No Nap, and Doze Alert.

­The names might sound funny, but the need for anti-sleep alarms is no joke. A poll conducted by the National Sleep Foundation showed that 60 percent of Americans have driven while feeling sleepy, and 37 percent admit to falling asleep at the wheel in the past year. In fact, sleepy driving can be deadly: The National Highway Traffic Safety Administration (NHTSA) reports that drowsy driving causes more than 100,000 car crashes -- and kills more than 1,500 people -- each year [source: Fenton]. While the safest course of action is to get a good night's sleep or to take a nap before driving, an anti-sleep alarm could come in handy on a late-night drive.

Keep reading to find out how these gadgets see you when you're sleeping and know when you're awake. 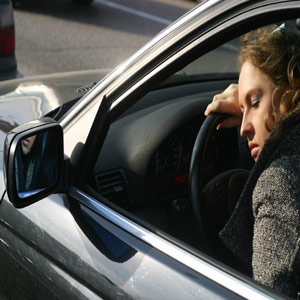 An anti-sleep alarm would have already awakened this tired driver.
Diana Starobinskaya/istockphoto.com

Let's start with the simplest anti-sleep alarm system, the over-the-ear gadget. This lightweight plastic device has an arm that slips over one ear, like some telephone earpieces or portable headphones do. Once it's on, a sensor inside the case measures the angle from a perpendicular perspective. If the driver is looking straight ahead -- as he or she should -- the alarm measures the angle at zero degrees.

If you've ever fallen asleep on a subway train or in your high school algebra class, you know that your head tends to fall forward as you doze off. You also know that you may stay asleep for a few seconds or a couple of minutes before your head jerks upright and you're awake again. It's annoying on the bus commute home; it's downright dangerous when driving a car. The anti-sleep alarm looks for any indication that the driver's head is tipping forward: When the earpiece senses that the angle has increased from zero to, say, 15 or 30 degrees, it sounds an alarm. Most manufacturers stress that the sound is loud and irritating enough to wake the driver, but not so loud or sudden that he wakes up with a start and yanks on the wheel or steps harder on the gas.

You can easily adjust the angle that triggers the alarm. If you know you can sleep with your head almost upright, you can set your earpiece to a smaller angle. If the alarm goes off every time you bop your head along with the tunes on your radio, then you should set your triggering angle to 30 degrees or more.

While these alarms work to help keep drivers awake, some high-end manufacturers are adding sleep sensors to their cars right at the factory. A few notable systems:

In-car systems can be expensive, especially those that involve in-dash cameras to monitor drivers instead of sensors that are already in place. Read on to find out who can benefit from an anti-sleep alarm, no matter what the cost.

Who Needs an Anti-Sleep Alarm?

D­rivers are the obvious target market for anti-sleep alarms. Truck drivers with tight schedules often find themselves hauling freight overnight. An alarm worn over the ear and a thermos of coffee could be enough to keep drivers alert without resorting to pharmaceuticals. Even the casual spring break road tripper could use a sleep alarm.

Over-the-ear alarms have uses beyond the driver's seat. A student cramming through the night could skip the usual chemical ways to stay awake and slip an alarm over his or her ear instead. Night security guards, especially those who work in stationary posts and gate houses, could also make use of this simple technology.

While these alarms can keep tired eyes open and brains alert enough to study, driving while sleepy is dangerous. Having a sleep alarm either built into in the car or worn on the ear may give tired drivers a false sense of security. This danger led the Australian state of Victoria to ban the devices in 2007 pending further safety testing.

Anti-sleep alarms would help travelers who'd rather hit the road than the hay, but the best and safest remedy for a driver's drooping eyelids is to stop and take a nap.

Are You a Drowsy Driver?

The National Sleep Foundation has a few tips to share so you can tell if you're too sleepy to drive: