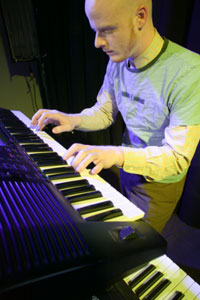 Photodisc/Getty Images
The economy of digital synthesizers has made it easier for musicians everywhere to create novel sounds.

It's not an accident that most of the synthesizers on the market today are digital. It's also not because their technology is necessarily superior to the sound of analog, Rhea says (though he acknowledges that digital synthesizers can produce a more stable pitch). Instead, it was simple economics: Digital instruments could be manufactured and sold more cheaply. "The average musician playing at a Ramada Inn is not going to buy something that costs $15,000," Rhea says [source: [source: Rhea].

The technology on the circuit board of a digital synthesizer is a significant departure from its analog predecessors. Digital synthesizers use processors and algorithms that have been programmed into the devices to interpret strings of binary numbers, which are then translated into sound waves. Research and experimentation in digital music had been going on since 1957, when Max Mathews of AT&T's Bell Laboratories wrote Music I, the first computer program to play a piece of music [source: Schofield]. The first wave of commercial digital synthesizers arrived in the 1980s, with the Yamaha DX7, released in 1983, becoming an early bestseller. Subsequent generations of digital synthesizers became indispensable for producers and musicians creating hip-hop, pop, rock and electronic music. Composers regularly use synthesizers to score films, whether it's an aural sketch intended to be filled out with live instruments later on or a soundscape rendered completely by synthesizer.

Over time, digital synthesizers have also branched into different forms -- some are add-on devices that would link physically to desktop computers, for example, while others are software programs that relied on a computer's hardware to perform all of its functions. (A so-called virtual analog synthesizer incorporates the knobs, dials and keyboard of an analog synthesizer in its interface while using digital technology to drive all of its operations.) Soon enough, digital synthesizers had other devices to keep them company: MIDI (musical instrument digital interface), a protocol introduced in 1983, links synthesizers with sequencers, samplers, digital audio workstations like Avid's Pro Tools and Apple's Logic, drum machines, and all order of electronic music devices and software.

Synthesizers have helped put the ability to make music into the hands of anyone with the inclination. That means there are fewer barriers to making music than ever before, but it also means that your neighbor with a voice that sounds like broken glass can create songs as easily as a Julliard-trained vocalist. And that's the upshot of synthesizers, Rhea says: "the democratization of music, with the concomitant horrors and wonders" [source: Rhea].

For lots more information on audio gadgets and inventions, see the links below.