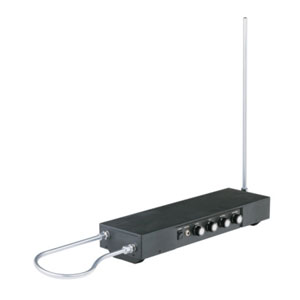 Behold, the theremin. But where did it come from?
C Squared Studios/Photodisc/Getty Images

"Make music with the wave of a hand! Sound like an opera star! So easy, anyone can do it!" Such were key selling points of the first commercially available theremin. Hailed as the world's earliest electronic instrument, Radio Corporation of America's (RCA's) theremin looked more like a tiny writing desk than the future of electronica. Built around 1930, the RCA theremin consisted of a hollow wood cube with a sloped lid perched atop four spindly, tapered legs. Were it not for its two prominent antennae, the RCA theremin would have seemed at home in almost any parlor.

The sound of the theremin has been described as "a purified and magnified saxophone" [source: Beckerman] and "a cross between an amplified child's slide whistle, a human voice and the squawks that emanated from early radio speakers" [source: Taub]. Inside the first theremins, a circuit of vacuum tubes, oscillators, coils and wires created electromagnetic fields around the instrument's two antennae. Players fluttered their fingers and waved their hands near the antennae to raise or lower the Theremin's pitch and volume. Inexperienced players often created nothing more than atonal blats and bleats. Theremin masters, however, made the instrument sound as gorgeous and haunting as any operatic aria one might have heard broadcast from Carnegie Hall.

So, what does the theremin have to do with Russian spy technology? We talk about the instrument's tangled history in the next section. 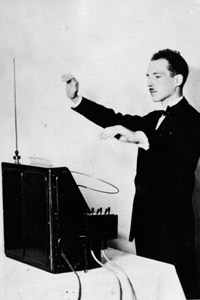 How it Works: The Science Behind the Magic

Way back in the early 1920s, when Léon Theremin worked at the Physico-Technical Institute in St. Petersburg, Russia, he noticed that when he moved his body in or out of an electromagnetic field produced by a radio frequency oscillating circuit, he changed its frequency [source: Harrison]. The human body has a certain natural capacitance (the ability to hold an electrical charge). What Theremin observed when he used his body to disrupt the oscillator’s electromagnetic field was the effect of this capacitance. Maybe because he was a musician and a cellist by hobby, Theremin began pondering how to exploit capacitance to create a new musical instrument.

In a 1989 interview with Olivia Mattis, Theremin said, "I conceived of an instrument that would create sound without using any mechanical energy, like the conductor of an orchestra" [source: Mattis]. What Theremin dreamed up was an electronic instrument with two primary circuits: a pitch circuit and a volume circuit. The pitch circuit used two tuned (radio frequency) oscillators: a fixed oscillator and a variable oscillator. The fixed oscillator generated waves at a static frequency. The variable oscillator was capable of producing a range of frequencies and was connected to a vertical antenna. Through a process called heterodyning, signals from the fixed and variable oscillators were mixed together. The frequency of one oscillator was subtracted from the other. The difference was amplified and, finally, output as an audible musical tone.

Today, hackers and musical tinkerers of all kinds use these same principles to create all manner of Theremins and Theremin-like devices. Since a simple fluttering of fingers is all it takes to make noise on a Theremin, it seems like the Theremin would be a cinch to play. Find out why many enthusiasts consider the Theremin the world's most difficult instrument in the next section.

Hands Off: How to play a Theremin 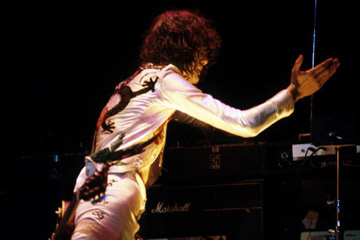 Jimmy Page of Led Zeppelin rocks a theremin during a concert in 1977.
Richard E. Aaron/Redferns/Getty Images

Many people have played the theremin, but only a few have mastered it. Below, we'll list three of the most important players in theremin history.

Lucie Bigelow Rosen: A student of Léon Theremin, Lucie Rosen kept a detailed notebook on theremin design and construction [source: Thereminvox.com]. Her theremin, designed by the inventor himself, is still on view at her former home, Caramoor.

Samuel Hoffman: Hoffman lent his theremin skills to numerous television shows and movie soundtracks including "It Came From Outer Space," "The Day the Earth Stood Still" and "The Delicate Delinquent" [source: Theremin.info].

With only two antennae to manipulate, the theremin seems like it would be a breeze to play. Looks, however, can be deceiving. In the hands of a master, the theremin can sing with the precision, vibrato and depth of a seasoned mezzo-soprano. When operated by a novice, on the other hand, it produces little more than earsplitting blats and squawks.

A theremin works by generating electromagnetic fields around two antennae. A straight, vertical antenna controls pitch; A horizontal, looped antenna controls volume. A masterful player makes very small, precise finger and hand movements in the field around the vertical antenna to change pitch and create melodies. ("You have to play with butterfly wings," virtuoso thereminist Clara Rockmore was quoted as saying [source: Wakin].) In addition to controlling pitch, a theremin player must also control volume. She accomplishes this by hovering her hand (usually the left) over the instrument's horizontal antenna. Exaggerated jerking and flailing movements are counterproductive. An experienced theremin master appears to be dancing with her hands, drawing a song from thin air, like magic.

The secret to great Theremin playing lies in perfect pitch control. A great player must possess a good ear, fine muscle control and ample coordination. The first time a new player approaches a theremin, his performance is more likely to sound drunken and atonal than distinguished or adept. Many hours of practice, however, help a player develop the hearing and muscle memory necessary for keeping a melody in tune. Once he's mastered those basics, he can progress to adding vibrato and dynamics to his playing. A real theremin master can make an instrument soar with the fortissimo of Pavarotti or fade to the most delicate of whispers. If you want to learn even more about the art of theremin playing, take a look at our article How to Play a Theremin.

Theremins with fixed volume controls may be somewhat easier to play since they only have one antenna. Curious about the different types of Theremins available? The next page has you covered. 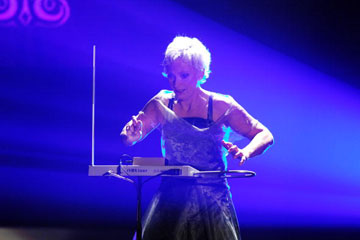 Find lots more information about this noir novelty on the next page.