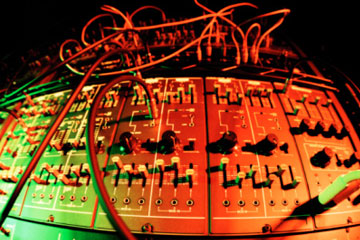 Jay Blakesberg/Workbook Stock/Getty Images
What many music buffs think of when they hear the word "synthesizer."

Even though many synthesizers possess the ebony and ivory keyboard of a piano, the rest of the machine -- a chassis lined with knobs, dials and switches -- looks more like it belongs in a garage instead of a concert hall. Nonetheless, the synthesizer contains the same two components as almost any other instrument: a generator and a resonator. Think of a violin, for example: the strings and the bow are the generator, and the body of the violin is the resonator [source: Rhea]. On a synthesizer, the generator is the oscillator, and the resonator is the filter.

For starters, let's look at the basic parts of a classic analog synthesizer. (We'll talk about digital synthesizers later.) Analog synthesizers generate their sounds by manipulating electric voltages. The oscillator shapes the voltage to produce a steady pitch at a given frequency, which determines the basic waveform that will be processed elsewhere in the synthesizer. The oscillator can be controlled by the keys similar to a piano keyboard, a revolving pitch wheel or another tool on the synthesizer's interface. The oscillator feeds the signal to the filter, and the musician turns knobs and dials to set parameters around the frequencies of a sound -- for instance, eliminating and emphasizing specific frequencies like we talked about earlier. The sound passes from the filter to the amplifier, which controls the volume of the sound. The amplifier generally includes a series of envelope controls, which help determine the nuances in volume level over the lifespan of a note.

In an analog synthesizer, each of these pitch, tone color and loudness functions is organized into a module, or a unit intended for a specialized purpose. The earliest modules were encased in their own individual housings. Each module creates a particular signal, or processes it in a particular way, and by connecting these modules together, the musician can layer, process and change the sounds into something different.

Now that we know about how synthesizers work, let's look back at their history.