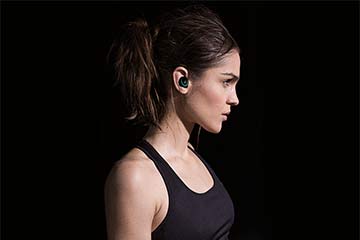 Dash headphones allow users to listen to music without cumbersome wires -- and to also keep track of their workouts.
Bragi

Music is many things to many people: art, inspiration, expression. For athletes and exercisers, good tunes can also be an important motivation tool. Whether it's the skull-rattling, heavy Metallica stuff that gets you going or the dulcet, yacht-rock offerings of bands like Hall & Oates, a good soundtrack can extend and enhance a workout. For a minute or two there, you might even forget that you're pounding the treadmill like a hamster in a wheel or participating in some strange lifting and grunting routine that certainly should be considered a form of torture under international law.

Of course, every exerciser marches to the beat of his or her own drum. Perhaps the mix of top 40 and Euro lounge music that many gym operators seem to enjoy just doesn't get the job done for you. As personal music devices seem to become increasingly smaller, it's never been easier to be your own DJ during a session on the stair-climber or a run in the park. There's just one pesky thing that seems to be getting in the way: wires. Headphone wires seem to have a knack for being too long, too short or simply unable to remain untangled.

The good news is that the wires may be on their way out. Dash headphones are wireless earbuds expected to hit the market in late 2015 that not only let users listen to music without any messy wires or heavy equipment, but also keep track of workouts while doing it. The minicomputer devices are primarily intended to enhance workouts, by giving users the ability to operate the headphones with predetermined physical cues. Eventually, they also may become a sort of personal assistant that handles a variety of day-to-day tasks. All for just under $300. 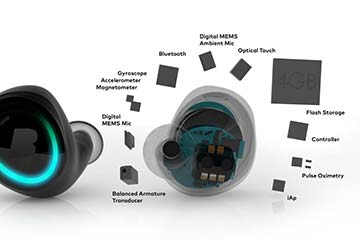 In addition to being completely wireless, the Dash headphones function without clips, wraps or earpieces. Designed using hearing aid molds, the buds are crafted to rest comfortably in a user's ear thanks to the different-sized silicon sleeves included with the product. These ensure the headphones will stay inside your ears during a jog in the park or a dip in the pool [source: O'Kane].

That's right, the headphones are waterproof. Swimmers can listen to an underwater soundtrack while gauging their body signs and paddling distances as far as about 30 feet (9 meters) below the surface of an ocean, lake or pool [source: DC Rainmaker].

The headphones operate with trackpads similar to those found in smartphones or tablets, allowing users to operate them with a series of touch commands like taps and slides. Think of them as two separate computers, each serving a different function. The left earbud handles the fitness-based work, which exercisers can access to start or stop a workout, check body levels and manage tracking options. The right earbud is the jukebox. It controls sounds, operates playlists and plays music in mp3 and AAC formats. It also can take a phone call, thanks to an imbedded microphone [source: Magdaleno].

Each earbud contains a Bluetooth chip that allows a pair to "speak" to each other and to a user's smartphone. The signals can't travel through the wearer's head, and the company is currently developing a specialized antenna to send it around the back of the head. As CEO Hviid recently explained to Kickstarter contributors, the company has run into some trouble getting the antennas just right. The antennas have thus far had limited ability to "hear" each other in areas where many wireless signals are operating at the same time [source: Kickstarter].

The headphones can generally be used without being connected to a smartphone, but they can do more with the help of a smartphone. According to Bragi, the smartphone cannot be further than 9-30 feet (3-10 meters) from the earbuds in order to maintain a connection. The distance depends on the physical surroundings. Some of the headphones' performance-tracking capabilities – like distance, speed and altitude – require the Dash to be connected to a smartphone's GPS. Others, however, are gauged by the sensors and stored in the microcomputers inside the earbuds. Dash similarly includes 4 GB of storage for music –uploaded from a cell phone over the Bluetooth connection – that it can access and play directly. The headphones can also play other tunes stored on your phone device [sources: DC Rainmaker, Solon].

As one might expect, all of that work requires a strong battery. The headphones can be fully charged in about an hour, according to Bragi, and have the juice to play up to roughly three hours of continuous music [source: O'Kane].