Why do all FM radio stations end in an odd number?

Browse the article Why do all FM radio stations end in an odd number? 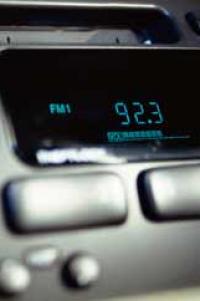 A car radio displays an FM station. Do you know why it ends in an odd number?
Stockbyte

­ FM radio stations all transmit in a band between 88 megahertz (millions of cycles per second) and 108 megahertz. This band of frequencies is completely arbitrary and is based mostly on history and whim. Inside that band, each station occupies a 200-kilohertz slice, and all of the slices start on odd number boundaries. So there can be a station at 88.1 megahertz, 88.3 megahertz, 88.5 megahertz, and so on. The 200-kilohertz spacing, and the fact that they all end on odd boundaries, is again completely arbitrary and was decided by the FCC. In Europe, the FM stations are spaced 100 kilohertz apart instead of 200 kilohertz apart, and they can end on even or odd numbers.

For more information on radio technology, see the next page.