The Rules of Dungeons & Dragons 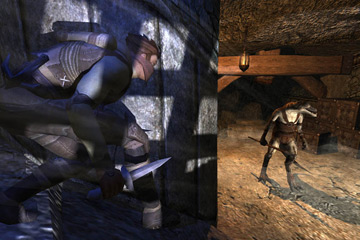 With a successful skill roll, some characters can sneak around unseen in the shadows.
Courtesy Turbine

The game's mechanics rely on statistics and chance. Characters have attributes like strength, dexterity, wisdom and intelligence. You quantify each attribute with a number. In the traditional paper game of D&D, players do this by rolling dice and assigning the outcomes to attributes. In general, these attributes can range from three (very poor) to 18 (superior). Other factors such as the character's race or equipment can influence these attributes.

Dungeons & Dragons Online follows the same model. As your character attempts to perform tasks such as hitting a monster with a weapon or disarming a trap, the game randomly generates a number and compares that to the difficulty of the task. With some tasks, you can make multiple attempts to succeed. Other tasks have a skill level or attribute threshold your character must meet to complete them. If your character's abilities fall below that threshold, you won't succeed no matter how many times you try.

Take a Chance on Me

Traditional D&D gamers roll up characters using six-sided dice to determine ability scores. In Dungeons & Dragons Online, players start with a character with a base score of eight in each of the six abilities. Players can allocate 28 points to adjust their characters' stats. Players who gain 1,750 points of favor from the game's various factions can allocate up to 32 points in stats. Alternatively, players can choose to follow pre-determined character paths that automatically adjust their ability scores and skills.