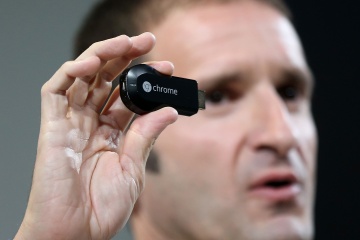 Most streaming media junkies already have some experience getting entertainment on their TV sets from Netflix, Hulu Plus, YouTube or the like. You can do it with gaming systems, DVRs, Blu-ray players, smart TVs that have streaming hardware built in and set-top boxes specifically designed for streaming, such as the Roku. But with the launch of Chromecast in July 2013, Google jumped into the streaming media game.

Chromecast is an enlarged thumb drive-sized dongle that plugs into a modern television set's HDMI (High-Definition Multimedia Interface) port and allows you to stream (or rather cast) media from your existing computer or mobile device through your home WiFi network and onto your TV screen. You can play movies and TV shows with resolution as high as 1080p, listen to music through your entertainment center's sound system and even throw Web pages onto your TV screen in some cases.

Your phone, tablet, laptop or desktop acts as the initial launching site for the entertainment and as the remote for controlling what you see and hear on your TV screen. Provided you already have as suitable device running a compatible operating system and have WiFi through a compatible router, you get all this functionality for the cost of the Chromecast, which as of its debut was priced below most similar streaming devices at $35 retail.

Read on to find out what makes this tiny but powerful device tick.