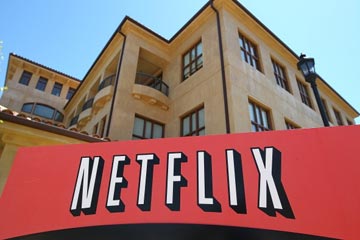 A sign posted in front of the Netflix headquarters in Los Gatos, California.
Justin Sullivan/Getty Images

Ever start watching a movie and then pause it because you have to leave home? You don't have to leave your Netflix movies in the middle anymore. Now you can watch the whole thing, anywhere, with the Netflix mobile app. This lets you view movies and TV shows on a smartphone or tablet. The best part? There's no extra charge, as long as you already subscribe to Netflix. The catch? You've got to have the right phone or tablet.

Android, Apple, and Windows 7 mobile-device owners can all access the Netflix mobile app. However, the application has come under fire lately for its relatively limited Android release. Only a handful of Android systems can support the Netflix streaming so far [source: Broida]. Netflix says it's working fast to bring video streaming to more mobile systems, but it's hampered by the lack of standardized streaming playback features across Android phones [source: Netflix].

The company has been releasing limited apps for years. As early as 2009, you could manage your queues from your mobile device and watch video previews [source: Pasch]. But it wasn't until 2010 that you could actually view a full-length feature or TV show on your iPad, iPhone, or iPod Touch. Since then, Netflix competitor Hulu has released a similar application for its "Plus" subscribers [source: Hulu].

But for the price you pay for Netflix streaming, (currently starts at just $7.99 a month), you won't find a better movie-viewing application. Here's how to get it.

How to Get Netflix Mobile

To download Netflix Mobile, just search for the app in the Android Marketplace, Apple iTunes Store, or Windows Phone 7 Marketplace. Log in with your existing Netflix username and password, and instantly stream movies already listed in your Instant Queue. You can download the app without being a subscriber, but it won't do anything. In that case, try the company's free month-long trial to see if you like the service.

If you have a Droid, check Netflix's database of devices to see if your system is compatible. The reason for the exclusivity is that Android phones are "fragmented," which basically means phone manufacturers and carriers have customized so many types of Androids that each one needs its own app [source: Krazit]. Each app takes time to develop and Netflix is working on this. Apple and Windows users have total integration, or zero variance in their mobile systems. Total integration lets every Apple product (iPad, iPhone, iPod Touch) and Window 7 Phone access any apps launched for them.

Another thing to watch out for is a device limit. While Netflix lets you register up to 50 devices per account, only six can be active at one time. So the more phones and tablets you activate, the fewer computers, DVD players, and streaming boxes (like Roku) you'll be able to use at home. If you have the most comprehensive Netflix subscription (currently $51.98 per month for unlimited streaming and DVDs, eight at a time) up to four mobile devices can stream simultaneously. But lesser subscriptions allow only one or two devices to stream at a time [source: Netflix]. 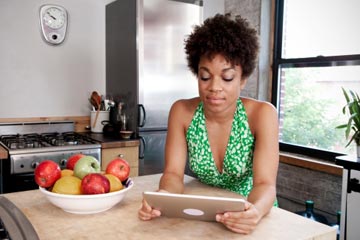 You'll have a more limited selection of movies available for streaming than with DVDs but the viewing quality will be about the same.
William Andrev/Photographer's Choice/Getty Images

Once you have the mobile app, you'll wonder, "What can it do?" The answer is: Anything you could do on the Netflix site. Just smaller.

In fact, the only thing Netflix Mobile compromises is size: tiny buttons and a small screen you can't comfortably share during a whole movie [source: Ackerman]. All other features are the same. You'll get the same streaming selections you would find on the Netflix website. (These are limited compared to what you can get via DVDs.) You can start movies from where you left off and buffering is quick. Streaming quality is high and controlled by easy-to-understand buttons.

You will want to make sure your data plan can support the strong demands of streaming. Streaming video does eat up a lot of data, so check with your phone provider to ensure you're not stuck with fees for going over your limit. Streaming a two-hour movie from Netflix will use around 300 megabytes of data [source: Miller].

One thing you'll definitely like is the precautions Netflix has taken to ensure streaming security. This has actually caused some of the delay in releasing new Android app versions, because Netflix has had to customize security on each version [source: Boulton]. So far, it seems the biggest complaint about the app is the delay in getting it to every device.

4 Reasons Your Phone Keeps Dropping Calls
How to Import Pictures from a Cell Phone to a Laptop
Are there risks to using a service like Mbuzzy?