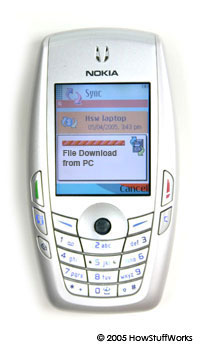 Cell phones can catch viruses when they download an infected file.

Phones that can only make and receive calls are not at risk. Only smartphones with a Bluetooth connection and data capabilities can receive a cell-phone virus. These viruses spread primarily in three ways:

In all of these transfer methods, the user has to agree at least once (and usually twice) to run the infected file. But cell-phone-virus writers get you to open and install their product the same way computer-virus writers do: The virus is typically disguised as a game, security patch or other desirable application.

The Commwarrior virus arrived on the scene in January 2005 and is the first cell-phone virus to effectively spread through an entire company via Bluetooth (see ComputerWorld.com: Phone virus spreads through Scandinavian company). It replicates by way of both Bluetooth and MMS. Once you receive and install the virus, it immediately starts looking for other Bluetooth phones in the vicinity to infect. At the same time, the virus sends infected MMS messages to every phone number in your address list. Commwarrior is probably one of the more effective viruses to date because it uses two methods to replicate itself.

So what does a virus like this do once it infects your phone?