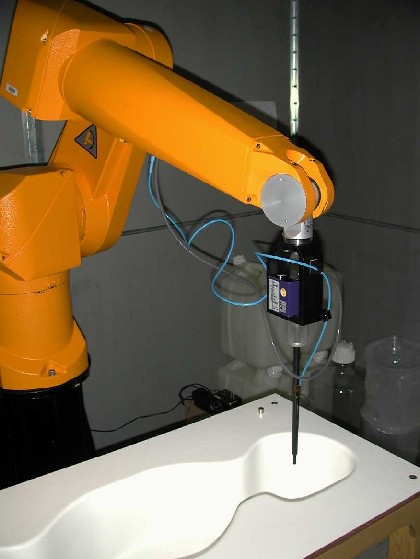 A probe attached to a mechanical arm is directed to take SAR measurements throughout a human-shaped mold. The mold is filled with a liquid mixture that simulates the electrical properties of human tissue.
Photo courtesy U.S. General Accounting Office

Every cell-phone model has to be tested and meet FCC standards before it is allowed to be sold in the United States. Testing is primarily done by the manufacturers themselves, which creates some uncertainty about the testing procedures, according to a GAO report.

The exposure limit set by the FCC for cell phones is based on the overall heating effects of radio-frequency energy. The exposure limit was established by the FCC in 1996. A year later, the FCC published non-mandatory testing guidelines that helped manufacturers comply with exposure limits. The FCC still allows other testing techniques once an FCC review of the procedures is completed.

Radiation levels are tested based on the specific absorption rate (SAR), which is a way of measuring the amount of radio-frequency energy that is absorbed by the human body. In order to gain an FCC license, a phone's maximum SAR level must be less than 1.6 watts per kilogram (W/kg). In 2000, the Cellular Telecommunications & Internet Association (CTIA) ordered cell-phone manufacturers to place labels on phones disclosing radiation levels.

Testing techniques vary somewhat, but are generally pretty standard. The GAO report "Research and Regulatory Efforts on Mobile Phone Health Issues," published in May 2001, describes how SAR levels are checked. Here is what the report described:

During the test, the phone's antenna is extended and retracted in order to check for any fluctuations in radiation that the phone might demonstrate in different configurations. The manufacturer is supposed to submit the highest SAR level measured during these tests to the FCC. Phones are required to test below 1.6 W/kg averaged over 1 gram of fluid.

To find the specific absorption rate of your phone, you can visit this FCC Web site. Your phone should have an FCC identification code. Type that code in the correct field and the site should offer information on your device.

Due to the lack of any industry-wide testing standard, the FCC must evaluate the individual procedures used by each manufacturer in certifying the SAR level of each new phone, according to the GAO report.

It's still unclear as to whether cell phones actually cause any significant damage to the human body. Studies continue to contradict one another on the issue. Additional studies may shed some light on the true effects of cell-phone radiation, but will likely only confuse consumers even further. In the meantime, millions of cell-phone users take whatever risk may be involved in using the devices.

For more information on cell-phone radiation, cell phones and related topics, check out the links below.