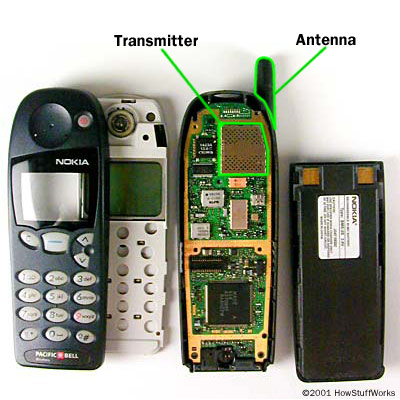 Radiation in cell phones is generated in the transmitter and emitted through the antenna.

When talking on a cell phone, a transmitter takes the sound of your voice and encodes it onto a continuous sine wave (see How Radio Works to learn more about how sound is transmitted). A sine wave is just a type of continuously varying wave that radiates out from the antenna and fluctuates evenly through space. Sine waves are measured in terms of frequency, which is the number of times a wave oscillates up and down per second. Once the encoded sound has been placed on the sine wave, the transmitter sends the signal to the antenna, which then sends the signal out.

Cell phones have low-power transmitters in them. Most car phones have a transmitter power of 3 watts. A handheld cell phone operates on about 0.75 to 1 watt of power. The position of a transmitter inside a phone varies depending on the manufacturer, but it is usually in close proximity to the phone's antenna. The radio waves that send the encoded signal are made up of electromagnetic radiation propagated by the antenna. The function of an antenna in any radio transmitter is to launch the radio waves into space; in the case of cell phones, these waves are picked up by a receiver in the cell-phone tower.

When talking on a cell phone, most users place the phone against the head. In this position, there is a good chance that some of the radiation will be absorbed by human tissue. In the next section, we will look at why some scientists believe that cell phones are harmful, and you'll find out what effects these ubiquitous devices may have.