Browse the article How the Dropbox Mobile App Works 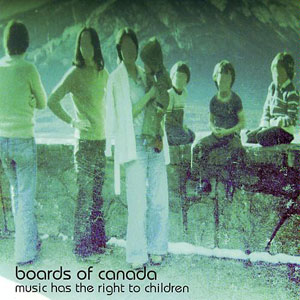 Despite the cover creepiness, the album is full of feel-good vibes.
Image courtesy Amazon

The concept is simple: I don't have a copy of my favorite Boards of Canada album in the car. I don't keep it shelved next to my living room sound system, and I don't have a copy at the office to pop in my work computer. Heck, I don't even own a physical copy of the album "Music Has the Right to Children." It exists in my life solely as a digital file, one that drifts along from phone to computer to entertainment system, without calling any of them a permanent home.

We live in an age where even our most beloved nuggets of media exist in a digital form, and cloud computing allows us to store a single copy of this data on a remote server. Then we can access it from anywhere.

The Dropbox file hosting service allows just such a cloud-computing scenario. Founded in 2007 by a pair of MIT students, Drew Houston and Arash Ferdowski, Dropbox enables users to sync their files with an online server, which they can then sync with multiple computers. Change a Dropbox document stored on one device and the changes will automatically apply to the document on every linked technology.

In 2012, the company claimed more than 50 million users in 175 countries -- users who make the service their own personal documents folder or media library [source: Dropbox].

And, of course, there's a mobile app version.

Features of the Dropbox Mobile App 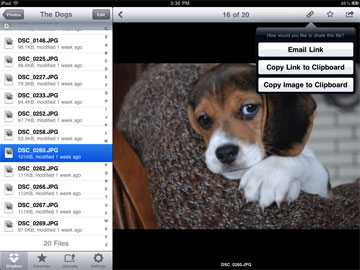 Does the Dropbox app sound like the perfect way to sort out your disordered filing system? If so, it's easy to give it a test drive. The Dropbox service and its associated apps are free to use. The company offers 2 gigabytes (GB) of space to anyone who signs up, though you'll need a paid account if you want to store data in the heftier 50-GB or 100-GB range. Paid business accounts start at 1 terabyte (TB) in size. On top of this, referrals earn you additional storage space.

So the first thing you'll need to do is download the Dropbox app to your phone. That's right; you don't even need to sign up for a Web account first. You can do everything through the app itself -- and "everything" consists of filling out the usual array of sign-up forms: first name, last name, e-mail and password. Agree to the terms of service, and you're on your way.

Next, you'll need to install Dropbox on your other devices as well -- especially the PC, Mac or Linux computer that hosts the files you plan to share. You'll be somewhat limited in what you can share from your phone. On iPhone, for example, you can only upload photos and videos. When it comes to accessing synced files, however, you're not so limited. Open documents, watch videos and play all the music you want, provided they're sitting pretty in your Dropbox folders.

And that's pretty much all there is to it. The app provides a doorway through which to access shared documents, documents that you'd otherwise have to sync to the phone itself or send via e-mail or another cloud-sharing application. 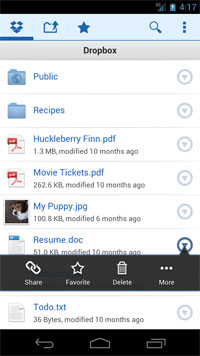 Dropbox on Android? It goes a little something like this.
image courtesy Dropbox

You can fire up the Dropbox mobile app on several mobile platforms, including iPhone, iPad, Android and BlackBerry. Plus, the company plans to roll out the app to even more phones and tablets in the future.

When you use Dropbox on a mobile device, the data will keep syncing to it until you fill either the free space available on the phone or the available space in your Dropbox account -- whichever comes first. You can also mark files as favorites to ensure easy access both online and off. And if you're worried about security, don't fret. You can set a pass code on your mobile device's Dropbox account.

Of course, Dropbox isn't the only player in the cloud computing, file-hosting game. Apple's iCloud, for instance allows iPhone and iPad users to access music, photos, calendars, contacts and documents across multiple platforms. It also provides free use of up to 5 GB of storage space (iTunes media and books don't count). Beyond that, you can expect to pay $20 per year for 10 GB, $40 per year for 20 GB and $100 per year for 50 GB [source: Ionescu].

Finally, there's Amazon Cloud Drive, which unsurprisingly offers -- you guessed it -- 5 GB of free storage space. Beyond that, you can shell out $20 a year for 20 GB of storage space, $50 for 50 GB and so forth. The maximum 1,000 GB runs $1,000 a year. If you're using the free version, MP3s that you purchase through Amazon.com don't count toward your 5-GB limit. Plus, all paid options feature unlimited storage space for music. So if you have 80 GB of music you want to store on the cloud, you need only purchase the 20-GB package.

Of course, all of these details are likely to change as these digital titans continue to wage war for your cloud business. Whoever wins out in the end, one thing is certain: More and more of your "stuff" is nothing more than a ghost in a distant machine.

Before writing this article, I'd only used Dropbox a few times to access my home music files. So when this article assignment came down the pipe, I asked my buddy Brian about it. He's a mobile app designer by trade, so I wasn't surprised when he whipped out his phone and scrolled down a lengthy list of synced Dropbox files: music, work documents and personal photos.

The technology is amazing, and it really does force us to rethink what we own and how we possess or access it. It's funny to think that much of the music or media I hold dear has never existed (at least for me) in a physical form. Increasingly, much of that data isn't even stored in a machine I own or have access to.

Welcome to the cloud.