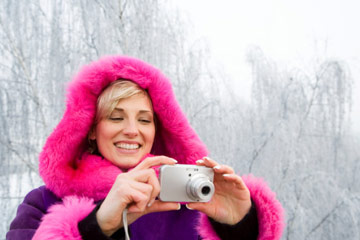 WiFi cameras let you upload pictures automatically to your computer or Web space from any location -- as long as there's an Internet connection. See more camera pictures.
picturegarden/Riser/Getty Images

In this day and age, it may seem a cumbersome to connect something, such as a camera, to your computer to transfer information. WiFi cameras, which first made an appearance in 2005, are aimed at solving cable clutter by making it possible to transfer photos wirelessly from a digital camera to a Web site or your computer. This means you can do things like e-mail photos of your trip while you're still on vacation, or get pictures directly off your camera and to an editor quickly if you're a photojournalist.

As with non-WiFi cameras, your choice of camera will be dependent on how you plan to use it. WiFi-enabled point-and-shoot cameras retail for a little bit more than their plug-and-play counterparts, from about $200 on up. As of early 2010, no WiFi SLR cameras were available; however, by using a WiFi-enabled SD card called an Eye-fi, many cameras can gain this capability for $50 and up [source: Eye-Fi]. These SD cards have a WiFi antennae built into them, which allows them to offer basically the same functions as a camera with built-in WiFi, but they lack the on-screen interface if a camera doesn't directly support it. With the Eye-Fi, you set up the card on your computer, then place it in the camera, where it automatically uploads photos to your computer or Web space anytime it detects a compatible WiFi network.

The difference between WiFi cameras and Eye-Fi cards is straightforward: WiFi cameras are already built to use WiFi functions out of the box, whereas Eye-Fi cards are an extra memory card. Both require a brief setup process and offer the same basic functionality.

If you're worried the simplicity of having a WiFi camera comes at the cost of image quality, your concerns are well directed. Certain models, especially early ones, may upload files at lower resolutions than what is stored on the camera. The high-quality shots remain on the camera, so they can still be transferred through a wired connection when you have the chance. You won't have that problem with most newer models, though.

So, once you've got your WiFi-enabled camera in your hands, you'll need to set up basic features, automatic functions and the Web site or computer to which you plan to upload your pictures. Read on to find out how in the next section.

How to Use WiFi Cameras

WiFi camera setup can vary depending on your camera's manufacturer. Two steps exist on all models for all models: setting up access to your home WiFi and setting up the location you want your pictures to go.

Most WiFi cameras will guide you through this process in their instructions or on the screen itself. Certain cameras have photo sharing Web sites set up already, meaning you'll just need to go online to pick a username and password, and you'll be done. Others may require you to first connect the camera to the computer, where you'll set up the same features using your keyboard instead of an onscreen interface on the camera itself. You set up WiFi-enabled SD cards in this way as well, by first connecting the card to your computer before inserting it in the camera.

Your WiFi camera should have a switch to enable the wireless local area network (WLAN), which gives the camera access to the network and allows you to send the pictures off to wherever you've chosen them to go. Different cameras are going to function differently depending on their own features and how you set them up. Some will require the push of a button to upload pictures while others will do so automatically when a WiFi hotspot is located. It's also important to keep in mind some public WiFi access spots require a sign-in or an acceptance of a terms of service agreement, so you may need to accept these or type your password in before the camera will upload your pictures. If you're using the Eye-Fi memory card in a situation like this, you'll need to first set up the networks' log-in passwords while installing the card in your computer, that way it will automatically log in when it locates secure networks.

For now, WiFi-equipped cameras still include a USB cable and connection so you can hook it up to your computer if you choose. Likewise, most of these cameras still use a memory card for storage, so card readers will continue to be useful and necessary for direct connection to a computer.

Your camera may come with a CD featuring programs for photo editing or for camera setup. Not all cameras come with this software, nor is it generally required unless your camera needs to interface with your computer for WiFi setup before you can use it.

It might sound like a lot of work to set up a new WiFi-equipped camera, so we'll look at the benefits as well as the downsides in the next section.

If you'd like to learn more about WiFi cameras and digital photography, you'll find lots more information on the next page.