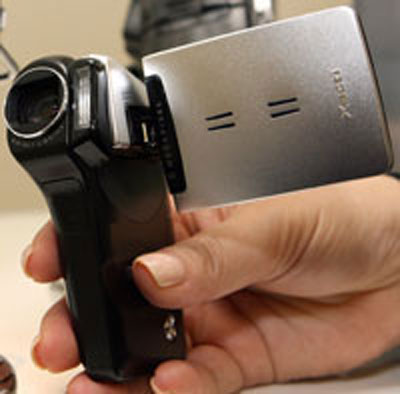 Sanyo's pocket-size Xacti fits in the palm of your hand.
AFP/Getty Images

Advancements in technology never cease to amaze, and the newest HD camcorders are no exception. With options that can fit in your pocket and take professional quality still photos, you may find yourself ditching your still camera altogether. Who needs a camera when a high-def camcorder will do just as well? Some of them may even take up less space in your pocket than the wad of cash you use to purchase them.

If you desire a small, lightweight piece of equipment, you're in luck. As you learned earlier, flash memory allows camcorders to come in small packages but perform just as well as their larger counterparts. Some of the HD video camcorders are so light you might forget you're holding them. Sanyo's Xacti HD1000 is the lightest of the bunch at a mere 9.5 ounces and 16.6 cubic inches. Its vertical design allows you to hold it with only one hand. Don't let its small stature fool you: This little device is capable of full HD recording. Samsung's SC-HMX20C, another lightweight device, is smaller than a soda can at 10.9 ounces and has the advantage of both built-in flash memory and removable memory cards.

Not only do HD video camcorders take excellent quality video, but many of them can take impressive still photos as well. Sony, for example, offers a pair of HD camcorders that can take 10-megapixel photos. The $1,400 HDR-SR12 comes with a 120-gigabyte hard drive, while the $1,200 HDR-S11 comes with a 60-gigabyte hard drive. Slightly more affordable are Canon's Vixia HF10 at $1,099 and the Canon Vixia HF100 at $899. These two camcorders both take 3.3 megapixel still photos, which is considerably fewer pixels than Sony's but nevertheless still respectable for the casual user.

HD video camcorders have several other interesting abilities as well. Some of them, like the Sony HDR-HC9 and Panasonic HDC-HS9, also support xvYCC, a color standard that achieves more vibrant and accurate colors. This standard claims to produce 1.8 times more reds, greens and blues than standard color.

Bragging rights also go to the Sanyo VPC-HD1000 and Panasonic HDC-SD9 (both around $799), which have face recognition technology that automatically recognizes faces within the frame and makes adjustments to exposure, contrast and even skin tone for the best result. The Panasonic, which also supports xvYCC, also incorporates the Intelligent Shooting Guide. This feature supplies hints to the photographer to help make better videos; it's like having your own personal photo instructor in your back pocket.

When it comes time to watch your creations, there's really not much to it. If you want your videos to pop even more, you can edit your HD video footage as well. Learn about viewing and editing basics on the next page.