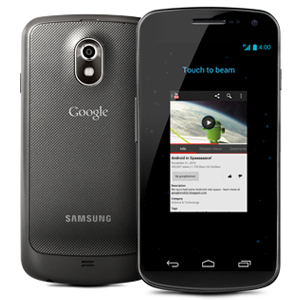 Android Beam lets you teleport just about anything from one phone to another. But first you need a device with NFC capabilities.
Courtesy Google

Minus the slashing and sawing, smartphones are the Swiss-Army knives of connectivity. Thanks to their WiFi and Bluetooth capabilities, as well as a variety of ports and cables, you can zip files around all over to your heart's content. But setting up connections between two smartphones can be a Vulcan-like pain in the neck. If only there were a way to just "beam" data from one phone to another.

Scotty might not be able to solve that problem, but Google has by adding Beam to its Android OS (operating system). Beam is a capability built into Android-based smartphones, tablets and other mobile devices. It first appeared in the Ice Cream Sandwich version of the OS that debuted in October 2011.

According to Google representatives, you can sum up Beam as this: it's a feature that enables just about any type of proximity-based interaction.

Yes, that kind of corporate-speak is too vague for us, too. Here's another way of thinking about Beam. Just touch your smartphone to another smartphone or tablet to transfer files, Web site links, YouTube videos, links to apps, maps and directions -- or just about anything else you can think of. Because Google's Android OS (operating system) is found on about half of smartphones sold these days, Beam is already spreading throughout the land [source: Mobiletor].

But here's the catch. In order to engage Beam, you need a phone with near field communication (NFC) capabilities.

Bewildered by Beam? Click onward and you'll see how Beam could add to your smartphone's already formidable digital toolbox. 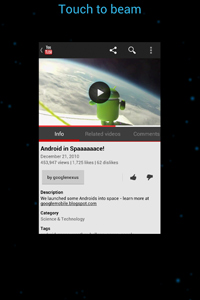 iPhone and Android Users Found to Have Different Personality Traits
Porting Out: It's Phone Fraud 101
Can you charge your cell phone with a fuel cell?