The Place for Air Interface 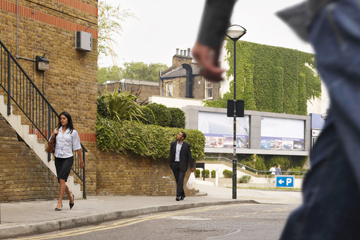 To reduce congestion and increase speed, carriers set up more base stations that cover small areas. Sometimes these stations are so small you won’t even notice them. (Hint: the guy in the suit is looking at one).
Image Courtesy Nokia Siemens Networks

You probably haven't paused to consider which language your phone is speaking. That so-called language is the air interface, the standardized communications protocol that your mobile device uses to communicate with a base station.

If you've ever seen a smartphone commercial (commence scoffing), you've seen the acronyms for various air interfaces, such as 4G LTE, WiMAX (Worldwide Interoperability for Microwave Access), HSPA+ (High Speed Packet Access) and more. Air interfaces have one major element in common – they all coordinate network traffic, telling devices when to send and receive data. But they differ in how they accomplish this task.

The WiMAX system is similar to your home or office WiFi protocol. It's largely fallen by the wayside as carriers choose other interfaces like LTE and HSPA+.

With LTE, devices can transmit and receive simultaneously because they use different frequencies for these tasks. LTE uses OFDM (orthogonal frequency division multiplexing), which divides a signal into parallel data streams that travel radio sub-channels. That signal is pieced together by processors at the other end.

LTE (and HSPA+) also employs another method called MIMO (multiple input multiple output). MIMO relies on multiple antennas and transmitters in both the phone and base station and enables simultaneous up- and download transmission.

HSPA+ is backwards-compatible with older 3G systems. LTE is not. But HSPA+ isn't the way of the future. Rather, it's a method for squeezing more life from existing infrastructure.

LTE, however, will be around for a while. LTE networks are called long-term evolution because carriers want to stick with this technology for a long time, rather than blow scads of cash to upgrade infrastructure every few years. LTE is considered a good long-term option because it's easier to scale up for greater capacity and performance.

Right now you won't find much in the way of pure 4G LTE networks. Instead, networks everywhere are still a hodgepodge of 3G and 4G, and even 2G technologies and air interfaces. In many areas, 2G, 3G, and 4G coverage overlap. You can see an overview of coverage with the interactive maps at OpenSignalMaps. As a result, even so-called 4G phones actually come with 3G chips so that they can access 3G and 3G+ networks.

Tighten your grip on your cell phone. On the next page, you'll see why your phone -- and your network --is getting faster and scary smart.