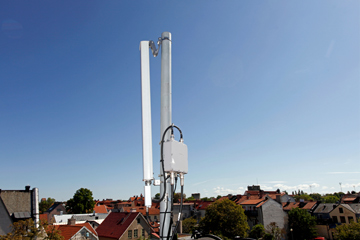 This microwave unit enables fast, flexible network rollout without a huge infrastructure investment on the part of a carrier.
Image Courtesy Ericsson

You already know that 4G is just an advanced radio system. The challenge for engineers and programmers is to pack as much digital data into each radio signal, thus maximizing the speed and efficiency of the network as a whole.

Like 3G, 4G networks are IP-based (Internet protocol), meaning that it uses a standard communications protocol to send and receive data in packets. Unlike 3G, however, 4G uses IP even for voice data. It is an all-IP standard.

Using these standardized packets, your data can traverse all sorts of networks without being scrambled or corrupted. To send and receive packets, first your phone has to communicate with a base station. A base station is just industry speak for those tall cell towers affixed with all sorts of antenna equipment; a base station relays data to and from the Internet and your mobile device.

There are a lot of different methods (called air interfaces) to establish a link between the base station and phone. You can read more about older air interfaces and their tangle of acronyms here in How Cell Phones work. We'll touch on newer 4G air interfaces later.

We won't blind you here with the definitions for each acronym, but common 3G interfaces include CDMA2000, HSPA, 3G LTE, EV-DO Revision B, DO Advanced, and Mobile WiMAX, to mention just a few. Each of these interfaces transfers data in different ways through radio waves in a given spectrum. You can quickly review those older technologies here.

Currently, 4G systems aren't really all-IP, simply because there's still lot of overlap between 3G and even 2G networks throughout various countries and around the world. But as 4G infrastructure advances, the all-IP data delivery system will be more fully realized.

This idea of IP-based wireless is just one factor that defines 4G. On the next page you'll see that a lot more ingredients go into the recipe that makes for tasty 4G performance.